Tomatoes and peppers are a staple in most gardens. They are versatile, great for canning and just plain tasty. I thought (ok, hoped), after my success with the cabbage, the rest of my seeds would follow suit and flourish. I thought. 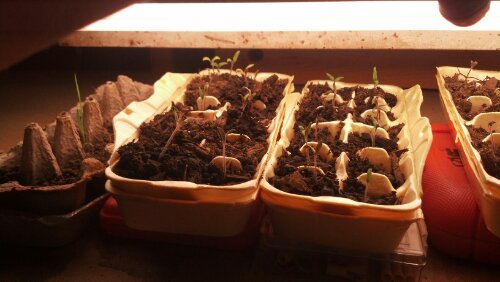 I started the seeds on April 11 and it took two weeks for them to sprout. I think I may have over-watered them in the beginning. Or, maybe it was the topsoil/compost mix we got for our beds. The cabbage seems to be doing well in the same mix though.

Whatever it was, they are finally sprouting, though not all of them. I’m pretty sure I will need to get some starts from the nursery to supplement, especially if I want to can enough tomatoes and sauce for a year’s use!

Has anyone had similar problems growing tomatoes from seed?