What is Project Appleseed? I thought I knew what to expect when I signed up for the two day course. A little history, a few drills with a rifle and a tshirt.

But, as with most things, it is much more than just a tshirt.

The Revolutionary War Veterans Association started the program in an effort to teach every American rifle marksmanship and to teach or refresh all participants about the foundations on which our country was built. It is a different side of what is traditionally emphasized in school.

The colonists and our forefathers made difficult choices and sacrificed everything for liberty-not just for themselves but for future generations…for us. I had never thought about it in that way. I knew they sacrificed, suffered and, in many cases, died for liberty; but, I didn’t think about it being for all of posterity.

I learned about the three strikes that led to the actual start of the war. I learned that it wasn’t just Paul Revere riding out calling “the British are coming”. It was actually three men riding in different directions with the warning. I listened to stories of men, leaving their wives, children and home, knowing that they probably would not return…all to escape tyranny.

Also, I learned how to shoot rifle. Safety was emphasized. We were drilled on the four rules for 45 minutes and then again at the firing line, at lunch and at breaks for history lessons. The four rules are:

1. Always keep the rifle’s muzzle in a safe direction.
2. Do not load until command.
3. Keep your finger off the trigger until your sites are on the target.
4. Make sure all of those around you follow the safety rules. This is in your best interest as well as others around you for obvious reasons.

On the first day for the first few hours I was frustrated, near tears and ready to go home. I couldn’t site the target or hit anything. I couldn’t even get a shot on the paper. I was nervous and didn’t want to ask for help for fear I would look like I didn’t know anything about shooting rifle. Well, I didn’t.

After each round of fire, all shooters would walk down to their targets. Again, safety was emphasized as we could not go down until the line was cleared which meant the safety was on on all rifles and a plastic orange flag was stuck in the chamber, a visual confirmation that the chamber is clear.

As I approached my target, I could already see that there was not one bullet hole in the paper…not even one! I stood there, hoping that no one would notice and think, “Wow, she can’t shoot.”

Before I knew it, an instructor was standing next to me, very nicely saying that he would go back with me and check to see how my position, trigger hand and siting looked. He said, “We’ll get you straightened out. Next time we’ll see some hits.” I honestly didn’t think so.

After this first target, we all gathered together to discuss our experience with shooting. This was the “redcoats” target. The “shoot boss” gave us instruction on the importance of breathing, siting and the six steps to firing a good shot. He explained that we would shoot this first target again at the end of the day and promised that each of us would see an improvement.

On the next volley we shot at a target that had five circular targets with squares in the middle of each circle. We started with our sites on the lower left circle. This time, with the help of my instructor I hit the paper.

When we walked up the look at the target, we discovered I was shooting high and right, but I had great groupings, which means I had all my shots close together, just not on the target. We also discovered that even though I was right handed, my left eye was the dominant eye so I needed to shoot left handed. This we could work with. 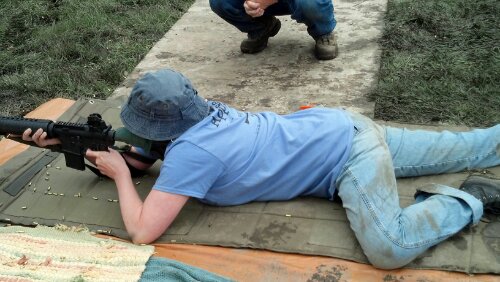 The instructors worked with me. Helping me adjust the sites on my rifle, coaching me on my position and encouraging me by telling me all the things I was doing right. I had a great trigger squeeze. I had a great stance. I was holding the rifle correctly. They told me I was doing great considering I was shooting with my non-dominant hand.

I progressively got better and by the end of the day, I was confidently shooting and handling the rifle. When we put the red coat target back up, I hit the paper (although I was still shooting high and right).

The instructors worked with me again the next day. I had to laugh because at one point two instructors were standing down at my spot, analyzing my aim, positioning and sites and helping me get them just right. I was excited when I was consistently hitting on target with great groupings.

My improvement from the day before was amazing, at least to me it was. My husband had told me that instructors love having first time shooters attend the course because they did not have any bad habits other shooters had picked up. They could teach how to correctly handle the rifle.

By the afternoon on the second day, I hit a target 4 times, the one I was aiming at to boot!

Again, I consistently hit every target that day, still shooting a bit high at times, but hitting all the same.

I can’t emphasize enough how amazing and transformational this experience was. Not only because I became comfortable with the rifle, but for the stories and history and the emphasis on why all Americans should continue to work to preserve liberty.

Perhaps my favorite quote of the day was one that John Adams wrote in a letter.

“Posterity! You will never know how much it cost the present Generation to preserve your Freedom! I hope you will make good use of it. If you do not, I shall repent in Heaven, that I ever took half the Pains to preserve it.”

This course is not only instruction on how to shoot rifle. It is celebration of American history and of the core values our forefathers founded this country upon: independence, self-sufficiency, and a willingness to sacrifice for liberty, for posterity. The stories told emphasize the individual’s contributions to freedom and the liberty we now enjoy.

This celebration really resonated with me because it is what I am trying to promote with this blog. Appleseed’s primary goal is to help return citizens to a pride in our country’s roots. My goal is to add sustainability and preparedness to my everyday life in the hopes that it will resonate with those who follow my blog.

If you want to learn more about the Appleseed Project, click on the link below…or better yet, sign up for a course. I know I will be taking it again and, perhaps, earn a rifleman’s patch.

This entry was posted in Garden Stories, Life. Bookmark the permalink.