I’ll be honest, we didn’t get to most of last week’s activities. We did, however, have a lot of impromptu fun! Here’s the line-up this week.

Math Activity
So we played Five Fabulous Frogs, but Joe was more interested in jumping the frogs than in counting them. Jake would laugh and clap every time one of them fell off the table.

The impromptu math fun came out of one of the busy bags. One of the bags had plastic Easter eggs and beads. The eggs had numbers on them and the object of the game was to put the corresponding number of beads in each egg, as well as matching the colors. I tried to play this with Joe, but it wasn’t until Ray changed it up that Joe really ‘got’ it. 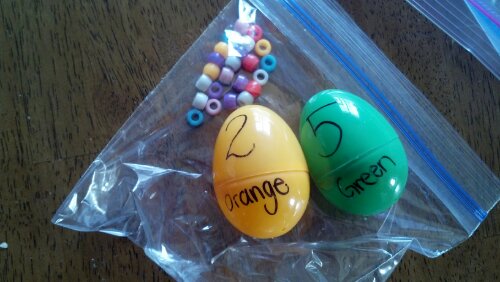 Ray pretended the eggs were little creatures and had them ‘talk’ to Joe in funny voices. “Hello, I need to eat! How many beads should I get?” Joe thought it was hilarious and they filled every egg.

This week we will try both games again and just work on counting in general.

Language Activity
We didn’t get to fishing for letters, so that will be this week’s alphabet game along with some phonics baskets. These should be fun for both boys.

Science Activity
The water bottle fountain is another one that we didn’t do so we’ll try for it again this week.

We did do quite a bit outside and with the chickens. Ray and his dad finished the playpen and the boys watched the chickens play and interact for a long while. Even though we were just sitting around staring at the chickens, we were learning at the same time. They are really fun to watch and Joe asked a lot of ‘why’ questions.

Bible Study/Craft
While we read the story, we did not build Noah’s ark last week so that is on the docket for this week.

Cute story: While we were in church this week, Ray and Joe were looking at a children’s book from the busy bag about Noah’s ark. Ray asked Joe who that was, the conversation went something like this…

Ray: Who is that Joe?
Joe: That’s Noah.
Ray: And what did Noah do Joe?
Joe: He built a boat for the animals.
Ray: How many of each animal did he take?
Joe: All of them.

One response to “Spring Activities Week 4”