Lissa cried out in frustration. This was the third time she had come out to find her Jerusalem artichokes dug up and scattered everywhere. Who or what was playing this cruel game?

After the first time, she set up a little fence around them, thinking rabbits were the culprits. The next time she put some netting over the fence, hoping that would do the trick. Now what should she do?

As she stood up, she spied a be-whiskered twitchy face staring at her from a hole in the tuber mound. Letting out a loud squeak, the mouse quickly retreated as Lissa threw herself down in a mad rage. 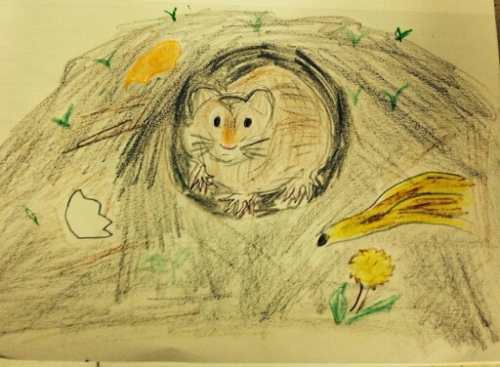 Dirty and tired, Lissa trudged back up to the house muttering to herself. She stomped into the garage and shouted, “Pudgy, get out here!”

Three mice, one fat, one tall and one small scurried out from under a box.

“What is it? What happened?” asked the fat one named Pudgy.

“There are mice in the garden,” she said through gritted teeth.

Pudgy, Pipsqueak and Gomer looked at each other blankly.

“Oh, but mice don’t eat tubers. We prefer grains and seeds, the occasional fruit and veggies and kitchen scraps. Of course, with all your delicious cooking, the three of us have been well fed…” Pudgy trailed off, seeing the look on Lissa’s face.

“I don’t care what you say they ‘normally’ eat. They are eating my potatoes and artichokes! I saw one, staring at me from it’s little house in the dirt mound!

The three mice took in Lissa’s disheveled appearance and dirt streaked face.  Hair and glasses askew, spaid held like a weapon at her side. 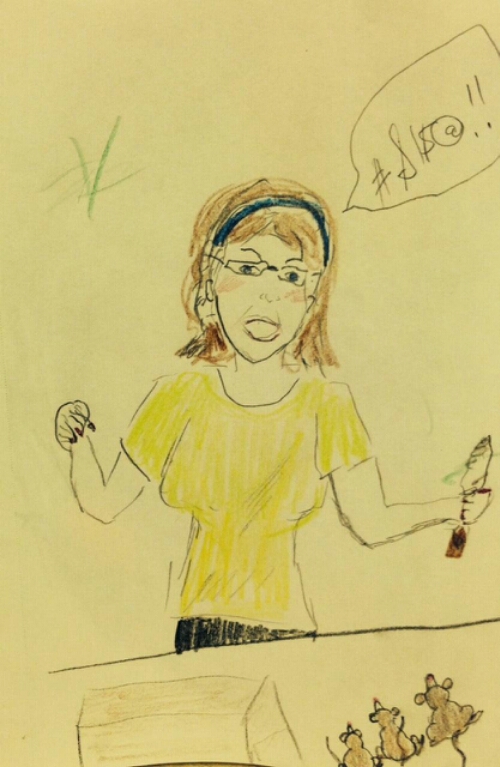 Pipsqueak, clearing his throat said, “Yes, well…we can check this out for you. See if we can do anything to help the situation. Perhaps offer them some of your delicious lasagna or–”

“Absolutely not! I will not be feeding any more rodents…especially rodents who EAT MY TUBERS!”

With that, she stalked off muttering under her breath.

“Scoot over Gomer,” Pipsqueak whispered. “You’re hogging the coffee can.”

The trio hid behind a rusted coffee can watching the mound that Lissa had attacked earlier that day. Dirt was scattered all over the yard. A result of her tantrum.

“Do you see anything yet?” Pipsqueak asked Pudgy.

“No…wait, I see movement on the mound.”

The trio peered around the side of the coffee can and watched as a few, very small, mice scurried around, digging up the yukon gold potatoes Lissa had just planted.

“Uh…those don’t really look like mice. I mean, they do, but not really…you know what I mean Pudge?” said Gomer.

“Hi, what are you guys looking at?”

Pudgy, Pipsqueak and Gomer all jumped. One of the creatures had snuck up behind them. It had a mean look about it like it was ready to fight.

“We could ask you the same question,” said Pudgy, trying his best to sound menacing.

The not-mouse stared thoughtfully at them and said, “You must be the mice we’ve heard about. The ones that are living it up in the garage.”

“Well, we all decided that we wanted in on that deal so we moved in to this mound. The lady keeps planting potatoes and tubers so we have plenty to eat.”

“What are you?” asked Pudgy. “You’re not regular mice.”

“That’s for sure,” it scoffed, looking offended. “We are voles.”

Field mice, thought Pipsqueak. Burrowing under the ground, eating tubers and destroying gardens. Look at it with it’s short tail…mice are so much more civilized.

“Look,” said Pudgy, “You have to go. Lissa, the owner, is very angry. You keep digging up all of the food she’s been planting…not the way to get on her good side.”

“Ha! Do you think we care? This is the perfect place! No cats, only a little dog who doesn’t care about a few voles and only one hawk who is pretty easy to hide from. We’ve only lost 3 of our family since we got here this winter.”

They continued to argue for awhile. The mice telling him how he and his brethren must go and the vole responding with a laugh, snort and scoff that they would not.

“Do what you will. We can hide in our tunnels forever and we are very fast so you’ll never catch us.” And with that, the pesky vole scurried away as silently as he had come.

This entry was posted in Adventures in Homesteading, Garden Stories, Writing. Bookmark the permalink.

2 responses to “Adventures in Homesteading: Rodent Rage (Part One)”