Adventures in Homesteading: The Beginning of the End (Part One)

“Since the hawk is having trouble keeping up with our vole problem and it appears we now have rabbits too, I’ve decided to get a couple of cats to help out.”

Pudgy and Pipsqueak stared, open jawed at Lissa while Gomer, once again, chased his tail.

“You are kidding, cats?” asked Pudgy, unable to hide the horror in his voice.

“Nope, not kidding. We are getting two tabby cats. Their names are Boots and Echo.”

“When do they get here?” squeaked Pipsqueak.

“This afternoon,” Lissa answered and, before they could say anything else, she had gone back into the house, leaving them to ponder this new dilemma. 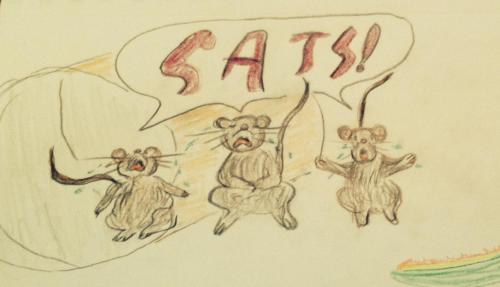 Pudgy, Pipsqueak and Gomer waited. The morning passed too quickly for their comfort and soon the crunch of gravel reached their tiny ears and they sensed them. They hid, trembling in fear.

After a few minutes, two tabby cats, almost full-grown, slinked into the garage with tails and noses held high.

“I’m sure they can’t talk,” whispered Pipsqueak with a shaky voice.

They watched Lissa pet the two striped beasts, give them some dry cat food and water before heading inside to fix lunch.

“What should we do?” asked Gomer.

Pudgy, for the first time, did not have a plan. He had wracked his brain all morning, but could not think of what they could do to sabotage, negotiate with or otherwise get rid of this threat to their comfortable existence. Cats, by nature, were sly, unreasonable creatures with only one thought: hunt.

“Ok,” Pudgy began, “we are not sure whether they can speak or not, but we have to give it a try. We have to attempt to reason with them.”

Pipsqueak looked at Pudgy doubtfully. “Really Pudge? You think that will work?”

“I don’t know, but we have to try,” he replied, trying, and failing to sound confident.

With quaking paws, the trio scurried behind a spare piece of chicken wire they had set up in order to safely talk to the cats. Quick to sense their presence, the two cats stopped eating and crouched to the ground, hair on end, ready to pounce.

Pudgy cleared his throat. The cats heads swiveled in unison, spying the three mice. A cheshire grin spread across their faces.

The cats slowly rose from their crouch and paced back and forth in front of the wire.

“Now wait just a minute,” said Pudgy, finding some courage in the face of danger. “We have been here a long time and we are hoping we can come to some sort of–“.

“Ah, but we don’t negotiate with our meals,” said Boots. “It’s just not in our nature.”

“But, we can help you.” said Pipsqueak. “We can alert you to the voles and rabbits, we can–“.

“Well now, what fun would that be?” asked Echo. “Where would we get our entertainment? How would we exercise our hunting skills?”

“Yes,” said Boots, sitting down and licking a paw. “We enjoy the hunt too much to get help from the likes of you. It’s the ‘thrill of the chase’ that keeps us from boredom.” 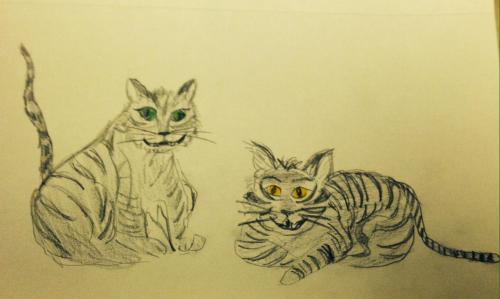 “But if you eat us, how will we get more lasagna? More chocolate cake?” Gomer whined.

Pudgy and Pipsqueak rolled their eyes, knowing that these cats couldn’t care less whether or not they ate more of Lissa’s delicious cooking. The cats snickered.

Glaring hopelessly at the cats, the mice turned tail and ran back into their hidey hole.

“No,” said Pudgy said to Pipsqueak. “We have to figure out how to combat these two.”

Pudgy sat and thought through their options, quickly dismissing each one. Lissa was firm in her decision. The cats were staying and could take care of the voles, rabbits, chipmunks…any small critter that threatened the garden. It was their worst nightmare.

“What if we talk to Keira…have her…take care of our problem,” said Gomer.

Pipsqueak and Pudgy stared open-mouthed at Gomer. The cloud of confusion that normally surrounded him seemed to have cleared momentarily. It only lasted a second, but it gave them hope.

4 responses to “Adventures in Homesteading: The Beginning of the End (Part One)”