The gardens look so different now than they did just a few weeks ago–growing greener with all of the rain we’ve had lately. Even now as I type this post, I can hear the the rain pouring down on the house with a roll of thunder promising even more. 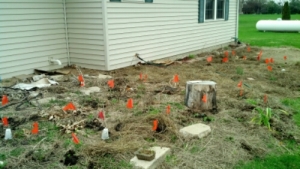 Tomatoes are on the vine, broccoli is being attacked by vicious cabbage loopers who have no respect for boundaries and are apparently immune to the power of the marigold (deep breath)…and the squash is going crazy with only one squash bug sighting so far.

We’ve tasted our first sugar snap pea of the season. They are small and a little tough, but hopefully will be better and more bountiful as the plant grows.  I’m also going to plant some for our fall garden as these do well in cool weather.

I thought the weeds in the swale had choked out the comfrey, but it has survived! I saw this leaf struggling, so I pulled all the clover that was suffocating it and…voila!

While these have the all appearance of sunflowers, they are actually Jerusalem artichokes. They will have smaller yellow flowers than their sunflower cousin.

These are one of three tubers we planted this year that we have never tasted. The other two are mashua and yacon. We planted them because we were intrigued by their flavor and for their nutritional qualities.

The hens have become spoiled. Every time I go out to see them they strut around, squawking for a snack or tasty morsel from the kitchen or garden.

We don’t have a shortage of lamb’s quarters, so if I don’t have any veggie scraps, I go pull a couple of handfuls of that from the field along with a head or two of lettuce that is going to seed.

They can thank me for this extra care by laying delicious brown eggs…soon. 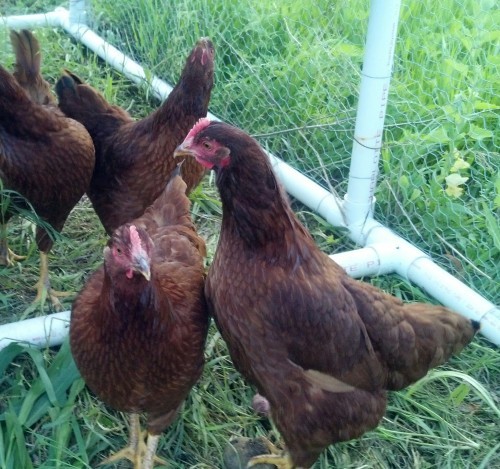 Esther with her sister Edith*

*I can’t actually tell the difference.

This entry was posted in Garden Stories, Writing. Bookmark the permalink.