Joe was out wandering through the vineyard where hops, hardy kiwi and grapes were growing. True, it was small right now, but someday…

Seeing something odd on the hops, he stopped to take a look. There was a very strange looking caterpillar crawling on the leaves. On closer inspection, he found 5 more and they all appeared to be feasting on the hops…the hops that his dad planned to use for brewing.

Joe used his bug gun to pull them off the leaves. He captured 7 total and fed 4 to the chickens…there was really only room for 3 in the bug house.

Grabbing his Kindle and a glass of milk, Joe set the bug house on the kitchen table and settled in to do some research.

After researching for awhile, Joe had two possible suspects. It was either a comma or question mark caterpillar.  They looked so similar in the young adult stage that it was difficult for Joe to determine which was feasting on his dad’s hops.

The only way to truly identify them, was to wait for the butterflies to emerge.

Joe went to find his mom and dad to tell them of his plan to closely observe the caterpillars until they turned into butterflies. He excitedly explained the process.

“First, the caterpillar puts down a little silky patch under a leaf or twig. Kind of like a little blanket.”

His mom and dad smiled as he continued. His excitement was contagious.

“Then, it sinks it’s little hooks in the silk and hangs upside down…like a bat!” 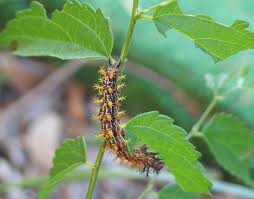 “I know! Then it just starts shedding its skin until the cocoon is done–actually, it’s called a ‘chris-a-liss‘ for a butterfly caterpillar, moth caterpillars make cocoons.”

Joe’s mom had never heard of a chrysalis before. “Oh, what is the difference?”

Here Joe paused to take a drink of milk.

“Ok,” he continued, “Now comes the really cool part. Inside the chrysalis, the caterpillar eats itself up!”

“If you opened up the chrysalis before the butterfly is fully grown, it would look like caterpillar soup!”

Now his mom was officially grossed out, but Joe was so animated and excited that she let him continue, glad she’d only had a few cups of coffee that morning.

“So once it’s done eating itself, all that is left are these discs. They used the protein goo to form wings, antennae, legs…all the parts of a butterfly! Then, the butterfly emerges up to two weeks later. And check this out,” he said, holding the bug house up, “They are already hanging upside down!”

His mom peered in the bug house and, sure enough, the spiky caterpillars were hanging from the roof, already starting to shed their skin.

“Can I keep them until the butterflies come out? Pleeeeeeeeeease??”

Joe’s dad had been listening, thinking of all the tiny holes in the leaves of the hops. He was also caught up in Joe’s excitement, but did not want to lose his entire crop to these pests.

“Very cool Joe,” he said with a smile, “Did you find anything about how to get rid of them? So they don’t eat all our hops?”

Joe looked at his dad and smiled.

“Oh dad, I can handle that. I’ll use my bug gun to get them off and then…I’ll squish them!”

This entry was posted in Joe the Bug Hunter, Writing. Bookmark the permalink.