Side by Side Comparison

Happily, I came home from a long weekend to discover that my girls had given us two more eggs. So this morning, Joe and I decided to do a little experiment: store-bought vs. freshly laid. 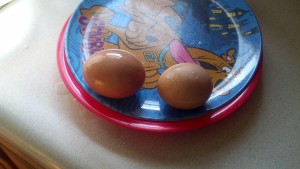 The one from the store was larger, but the yolk was not quite as yellow as the one from my girls.

They cooked up about the same; but, though smaller than the store-bought, the yolk on the fresh one was thicker and creamier with a much richer flavor.

I believe Agnes laid the first couple of eggs. She was in the coop this morning making all kinds of racket. She must have tried to lay an egg again, but it was a soft-shelled egg. Near as I can figure, she was up in the roost when she laid it because it was broken underneath.

When I retrieved it, it was obvious that she hadn’t tried to eat it as the yolk was still intact. If they do start eating them, we will have to start over with new layers because once they get a taste for eggs, you can’t stop them from eating them all the time. The only cure for chicken cannibalism is the freezer.

If this becomes too much of an issue, we will try supplementing their food with more calcium…but the layer feed we have been feeding them is pretty balanced, so this may just be a natural part of the learning process for a new-to-egg-laying hen.

Our makeshift tunnel finally ripped to shreds so we used some caging material we had for our plants to create a new one. I think the girls really like being able to see when they go up and down the ramp because every time I’m out there, two or three of them are taking turns going up…and coming back down…going up…and down. They’ll stop in the middle of the ramp and the one behind will yell-squawk at the one in front. “Get out of the way Bertha!”

This entry was posted in 13 Skills, Adventures in Homesteading, Chickens!, Writing. Bookmark the permalink.