When I initially ordered trees from Burgess, I received a few free seed packets, thanking me for my order. Most of the seeds I had heard of, but “vine peach” was a new one.

It is supposed to have the look and texture of a mango with the slight taste of a peach. Everything I’ve read so far says to make jam out of it because it’s very bland. But…it does attract beneficials like bees and butterflies and is beautiful with its little yellow flowers. Plus, it grows quickly. 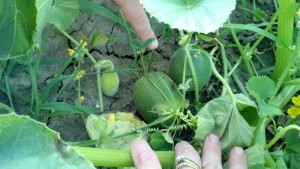 I found a couple of cucumbers on my walk-about. They are rather pathetic looking, but maybe they’ll taste ok.

Until yesterday, we had been collecting two eggs a day…now we are up to three, so more than one of my girls must be laying.

They were rewarded with a feast of watermelon rind, corn cobs and tomatoes. It took about ten minutes to completely decimate the rinds.

I also started the lettuce and beans for my fall garden yesterday. The beans went where all of the potatoes were and the lettuce went in the cold frame. 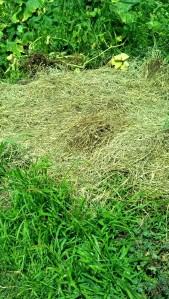 And then, there’s my mistake. I thought these beautiful burgundy plants were amaranth. Turns out…they are not. I saw the same plant at a friends house, on the road side and at the park. Not amaranth.

This entry was posted in Garden Stories, Writing. Bookmark the permalink.