Joe was bummed. It hadn’t snowed yet and it was almost Christmas.

Even more than that, his birthday was the next day.

“I want it to snow for my birthday,” he grumbled sadly.

Nim and Lil sat that night discussing what to do about Joe’s wish. They sipped on tiny tumblers full of hot cocoa–with extra sugar and whipped cream on top, of course–and tried to think of some way to make it snow.

“Couldn’t Santa make it snow?” Nim asked Lil. She had become a scout elf a year or so before Nim was initiated into the ranks, so maybe she knew something he didn’t.

“Sure, he could,” Lil told him. “But he’s a bit busy now with the  keeping the Builder Elves hard at work making toys for good little boys and girls.”

True, thought Nim, but they couldn’t make snow without him, even with all of their pixie dust combined.

“I just want to do something special for Joe’s birthday,” Nim sighed.

They had already spread out a tissue paper table cloth. On a paper plate in the middle sat a mountain of birthday sprinkled chocolate donut holes with 4 candles jammed in the top.

“Something is missing,” mused Lil, tapping her fingers.

“Snow is missing,” said Nim for the fourth time.

“We could use flour,” offered Lil.

“Or powdered sugar,” she tried.

“Or we could use the snowflake sprinkles in the cabinet,” she suggested.

“We could cut paper snowflakes and plaster them all over the walls, hang them from the light fixtures and throw the paper cutouts all over the place!” Nim proclaimed, jumping and twirling around.

The two got busy cutting. Nim scribbled a quick note to wish Joe a very happy birthday. He had heard his mom and dad talking about the fun-filled day they had planned for him, so he included a little schedule of events.

And now, for the fun.

They flew wildly around the kitchen table throwing handfuls of tiny paper triangles, half circles and diamonds in the air. The scraps landed haphazardly all over the table and floor.

Poor Charlie ran in fright as a drift of paper snow fluttered down on his coat.

After they were satisfied with the blizzard they’d created, they found a bag of snowman marshmallows tucked away on the top of the microwave.

“I bet they were trying to hide these from us!” said a shocked Lil.

Nim roared with laughter. “And who could blame them? We’ve gone through almost 3 pounds of sugar since we’ve been here…and that’s holding back!”

So they ate a few of the marshmallows, leaving a handful for the kids on the table. 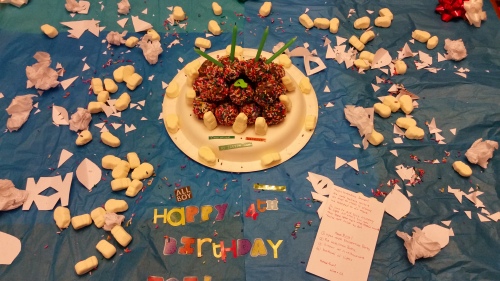 The snowflakes they had made hung from the lights and Nim and Lil took their places. 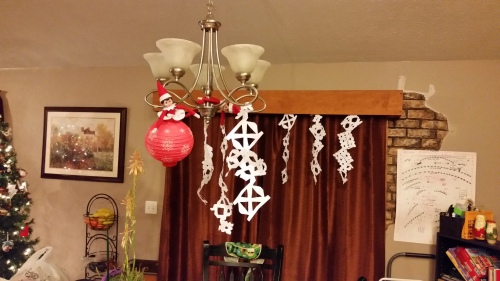 “I’m going to hang upside down so I can see his face when he finds his breakfast birthday cake,” Nim said with delight. “He’s going to love it!” 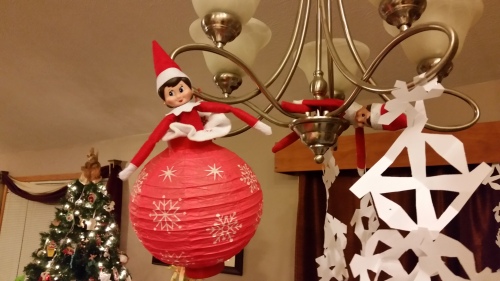