Upon returning to the house, Nim and Lil stumbled upon a box of Christmas tree brownies hidden in the third drawer of Joe’s mom’s desk.

“Maybe this is her secret stash,” said Nim, feeling a bit guilty as they ripped into a fudgy brownie.

“Well it’s not all that well-hidden if it is,” replied Lil through a mouthful of chocolate.

“Lil, it was in the third drawer of her desk under three notebooks and wrapped in a kitchen towel,” Nim said with a smile.

“Like I said, not very well hidden for a ‘secret stash’.”

They both had their fill of brownies and sat dangling their legs over the counter trying to come up with a plan.

Then she started singing.

Before long, she was dancing and singing in full force, while Nim covered his ears and cringed.

“Lil, please! I like to sing just as much as the next elf, but that song is driving me crazy! The kids have been watching it for days!”

“I know, it drives me bonkers too! I just can’t stop. It gets in your head!”

“Well get it out of your head. PLEASE!”

Lil stopped singing at the top of her little lungs and settled for a low hum instead.

“I can still hear you, Lil,” Nim said between clenched teeth.

“You know,” said Lil, eying the pantry. “There is some food coloring in that cupboard.”

“What do you have in mind?” asked Nim.

“While I hide in a drawer with my ears plugged,” Nim groaned. “Lil, you know as soon as they see the milk they will be singing that song all day!”

Lil grinned impishly. “It is a good song Nim.”

Nim knew by now that once Lil had her mind set on something, there was no stopping her.

So, after dying the milk, they used the four remaining brownies as clues to help the kids find where they were hiding. 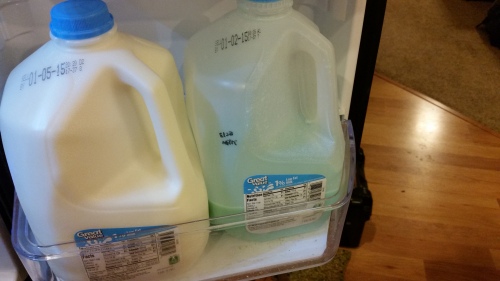 Nim hid in the silverware drawer hoping to muffle some of the singing.

And Lil hid in the fridge, wrapped in a warm towel.

“Alright Nim,” Lil whispered. “Get ready for the concert!”

But Nim didn’t hear her. He’d already covered his ears.