A Hunting We Will Go

The Bob Books reading program continued yesterday with a scavenger hunt. I drew the floorplan of our house. Then hid the words from Books 1 and 2 indicating on the map where they were.

Joe and I went over the floorplan together until I was confident he knew each room and understood how to play the game.

Then, we went hunting.

I gave Joe a clipboard to use so that we could keep all the words together after we found them. 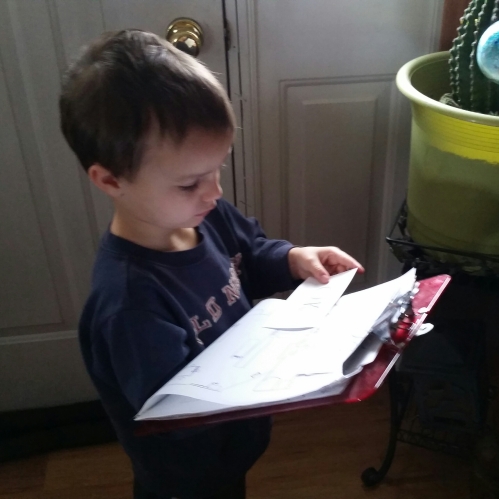 After finding a few words, Joe decided he wanted to play with the forceps from his doctor kit. Rather than abandoning the word game, I incorporated them into the hunt.

We found all ten words and Joe wanted me to hide them again and keep playing. So we played one more time and then, after counting the cards in Spanish, we moved to the table to read Books 1 and 2.

I spread the cards out on the table and as we came to each word in the book, I asked him to find it and pick it up.

I had to dog ear the cards so that he could use his “grabber” to get the words.

He also insisted on holding the book with them.

He showed some interest in punctuation when pointing to the period and then the comma and asking what they were. Exciting!

We are starting Book 3 this week and adding the following words to the word bank: rag, Dot, has, a, dog and hat.

Hmmm. Word bank…sounds like a good game for learning both words and numbers.

This entry was posted in For the Kids, Garden Stories, Life. Bookmark the permalink.

2 responses to “A Hunting We Will Go”