We tried to fight the squash bugs.

I marched out every morning to hunt and squish eggs.

If I saw any climbing around the leaves, I’d quickly dispose of them…valiantly fighting the urge to freak out and stomp all over the garden.

But I got lazy.

I’d check a few leaves before heading out to say good morning to the chickens, only to remember again when I came out to pick ripe tomatoes in the late afternoon.

Sometimes, I wouldn’t remember at all.

Then, I went to see if any pumpkins were ready to pick.

There they were…crawling all over the place.

There were thousands of them…maybe even millions.

Every time I tried to pick up a pumpkin, they’d crawl all over my hands.

I saw them on my boots.

I felt them in my hair–ok, maybe that was just my overactive imagination and disgust of these pests. You get the idea though…there were a lot of them.

I tried to pick them off. Even thought about getting the bug vacuum out, but there were just too many of the white and gray creeps.

I decided to cut my losses.

I picked all of the pumpkins that didn’t have puncture wounds and put them on the deck to use later.

Then, I cut the vines, squared my shoulders and pulled the whole thing out to the chickens. They were happy for the treat and I was happy to see the bugs eaten. 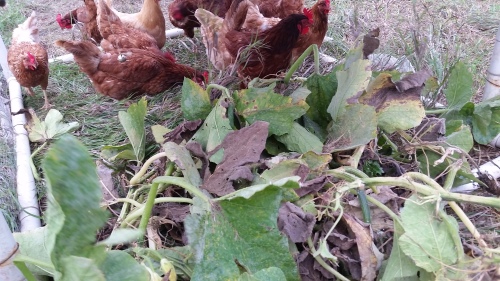 This entry was posted in Chickens!, Garden Stories, Permaculture, Writing. Bookmark the permalink.