“Lil!” Nim exclaimed at the sight of her swirling in ribbon on the kitchen counter.

Lil smiled as she flew in for a big hug, knocking Nim to the ground in her excitement.

“What are you doing here?” he asked after getting back up. “Don’t tell me Santa reassigned you after you filled the coffee pot with powdered sugar!”

“No, no. He was very upset with me, but he gave me one more chance. I told him I would make sure to keep the mischief to a minimum.”

“Then why are you here?”

Lil twisted, twinkled and twirled around the room, laughing in delight.

“Oh Nim, I missed our escapades so much that I just had to visit and help you with your next adventure!”

“Yep! I finished setting mine up and came over to share the idea. You are going to love it!”

Nim eyed her warily, wondering what she had in mind.

“Don’t look so afraid Nim. It’s not that bad or messy and the boys are going to love it!”

Lil soared into the living room where she had stacked two big boxes full of toilet paper and paper towel rolls.

He shook his head as he joined her.

Lil just smiled as she opened the boxes and started pulling the packages out.

“We aren’t going throw it everywhere. Although that does sound fun,” she said tapping her chin.

“Then what are we doing?” Nim asked quickly so she couldn’t change her mind about making a mess.

After she had finished getting everything out, she spun around to face Nim with a big grin on her face.

“We are building a fort of course!”

When Nim and Lil had finished, they sat back to view their handiwork.

“It’s even better than the one I built. We need to work together more often.” 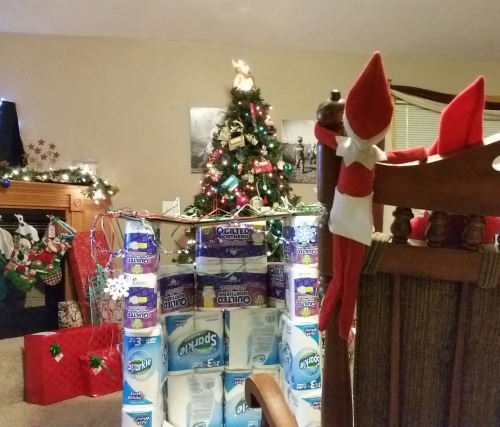 Nim’s face lit up with a smile. Of course!

“Lil, what if we did work together every night?”

Lil looked at him with hope and then disappointment.

“How can we? I still have to get back to the girls before they get up in the morning. I’m exhausted as it is. I can’t imagine doing this every night.”

“But you won’t have to do it every night. We can take turns. You came here tonight, and I’ll fly to you tomorrow night. We can make a list of what we want to do the remaining 10 days in the season.”

Lil giggled and flitted around. She was so ecstatic that she ran straight into the fort they had just built.

Nim shook his head and tried not to laugh.

“Lil, you need to be more careful. Now we have to build it all over again!”

“I’m so sorry Nim,” she said looking at the clock. “I don’t have time to stay and help. I need to start back if I want to make it before the girls get up for school.

“Oh alright. You head back, but think about my idea on the way. There aren’t that many days left and if we triple our sugar intake, I think we can do it.”

“Ok, I’ll think about it,” she said as she swooped out the window.

Nim quickly rebuilt the fort and got into position.

He’d had so much fun working with Lil again and he just hoped they could find a way to make his idea work.