A Trellis for the Squash

I’ve learned a lot over the past three years.

I’ve learned that squash bugs are evil creatures that will destroy squash beds if I don’t remove eggs one, or two times a day.

I’ve learned that Japanese beetles and aphids suck the life out of any green leaf on the property.

I’ve learned that beans, Brussels sprouts and cucumbers refuse to grow for me.

But this year will be different because of all the lessons I’ve learned.

And, perhaps the most important lesson is to make real, sometimes drastic, changes based on those lessons.

Starting with the back garden. 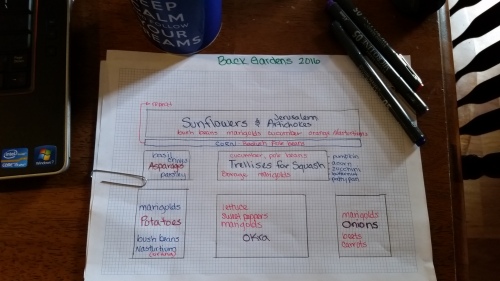 One of the major changes/new approaches I will implement this year is trellising.

Rather than planting the squash so that it runs all over the ground, slithering and choking other plants, I’ll build a trellis.

Squash is, obviously, heavy. Zucchinis and smaller squashes will have no problem with climbing and hanging from a trellis, but heavier fruits like butternut, pumpkins and watermelon will need “hammocks” made from nylons or old t-shirts.

I’m not sure what type of trellis I am going to build, but am leaning toward an A-Frame using either pallets, 2x4s or livestock panels.

There are tens of thousands or pictures and posts in the gardening blogosphere showing the success of this method. It works…at least, it’s worked for others.

Will it work for me? It’s worth a try.

Take that you squash bugs!
The battle lines have been drawn
Revenge, oh so sweet

This entry was posted in Education, Garden Stories, Haiku. Bookmark the permalink.

One response to “A Trellis for the Squash”