In chapter 1 Jake and his mom just got new chicks. One of the chicks is grey with hairy green legs. Jake names her Pecky Greenleg and then finds out that ‘she’ is a ‘he’…and can talk.

In chapter 2 Jake and Pecky decide to try and learn where Pecky came from as none of the other chicks can talk. Jake promises to start at the hatchery.

In chapter 3 Jake tells Pecky he had no luck at the hatchery but that the man he talked to seemed nervous and uncomfortable talking about the gray chicks so they decide they need to go to the post office to find out more about the delivery.

In chapter 4 Jake and Pecky visit the local post office where they learn that the delivery man from McDougal Hatchery came back after the delivery and swapped the package with another box.

In chapter 5 Pecky and Jake decide that they need to take a trip back to the hatchery to confront Gilbert.

“I don’t understand. Why do you need to go back to the hatchery? We just bought chick feed last week.”

Jake shifted uncomfortably and tried to look his mom in the eyes.

“Well, I just want to ask a few questions…find out how a hatchery is run. For-for a-a paper, er, a story I’m writing.”

His mom looked at him oddly. He knew she didn’t believe him. Knew it was a lame reason when they’d just been there last week.

He sighed. That’s it. He had to tell her the truth.

“Alright dear,” she said suddenly, turning to get the car keys. “I need to pick a few things up in town anyway, so I’ll just drop you by the hatchery first.”

Jake couldn’t believe his luck. Now, how was he going to get Pecky in the car without her noticing? 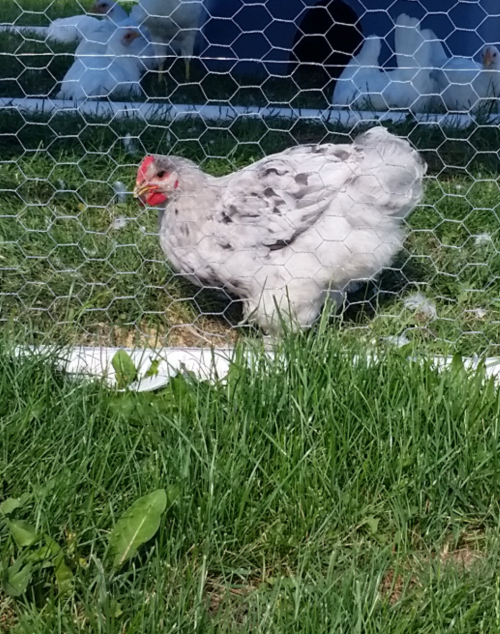 An hour later, Jake’s mom pulled into the parking lot at the hatchery.

Jake nodded as he climbed out of the car, carefully pulling a rather large, bulky backpack out after him.

He waved nervously at his mom and waited for the car to disappear around the corner before walking inside.

“Hi, I’m looking for Gilbert,” he said to the smiling woman at the front desk.

“Y-yes. I have a few q-questions for him. For a-a story I’m writing about chickens.”

The woman smiled at him brightly and picked up the phone.

“Hold on there just a minute and I’ll see if he’s busy right now.”

“Alright dear, Gilbert is just three doors down that way,” she said, pointing down the dimly lit hall.

Windows lined one side of the hallway. Jake looked out and saw row after row of chick brooders. Some were stacked in fives, others as long as a pool table.

Workers in white lab coats walked about, checking on the fuzzy yellow, brown and white chicks. A soft glow filled the room from the heat lights keeping the chicks warm.  It smelled like musty hay and ammonia.

When he reached the third door, he knocked timidly.

The man he’d talked to the week before opened the door.

He looked at Jake with surprise and then resignation. “Oh. You’re back. Well, you’d better come inside. I’m sure you have a lot of questions.”

Pecky shifted in the bag, poking Jake in the shoulder with his beak.

Hmm. Well isn’t this interesting. He definitely knows something.

“Yes,” said Gilbert, glancing at the bag. “I do know something. Something about where your bird came from and why you mustn’t tell anyone about him. For his own safety…as well as yours.”

This entry was posted in Chickens!, Pecky Greenleg, Writing. Bookmark the permalink.