The sound of the mower droned on.

Grass clippings whirled through the air.

I counted again, then a third time but no more hens appeared.

I opened the hatch slowly and stepped in. I was careful to don my garden boots this time to avoid the inevitable toe pecking.

Pecky’s ladies twittered around my legs, hoping for scraps.

Pecky stood apart from the rest. A stoic, sad look in his eyes. 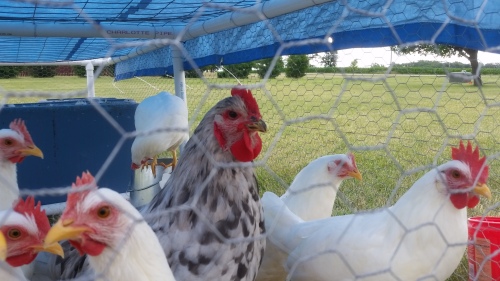 I started counting again, knowing I’d have to lift the little blue houses to do a thorough check.

Then I found her.

A sad, little bundle of bedraggled muddy feathers. She was huddled under one of the blue totes we are using as temporary hen houses. A few of the meaner hens were plucking feathers out of her tail.

Her head was bare and raw…no feathers remained.

We’d noticed some scabbing on her head the day before and had treated it with Blu-Kote. It seemed to help a little bit, but not enough to stop the bullying.

I pulled her out of the pen and let her roam around, alone and free from the aggression that filled every corner of the pen.

Why is this happening? What possible reason could these normally docile hens have to turn on each other?

The victim could be sick.

Chickens are vicious. Like other animals, they can sense weakness among the flock…and weakness they cannot abide.

Or, maybe they are bored and picking on the poor dear for sport. Maybe they are molting and cranky and taking it out on each other.

But, perhaps the most logical and likely reason for this brutality is nutrition.

The pullets have become hens and all are laying eggs…rather thin-shelled eggs.

We still have them on the chick starter feed so it is time to switch them to layer feed, which is higher in protein. We may even need to throw some feather fixer feed in with it.

Chickens are a selfish lot. They aren’t caring or nurturing creatures. There are no kind old hens willing to tend to the sick until they recover from whatever malady afflicts them.

No, chickens are not tender-hearted or compassionate.

While we may view this brutality as unkind, a, possibly evil, instinct tells them to eradicate the weak.

For them, it’s survival of the fittest.