Math was a struggle for me in school.

I did ok in Geometry. I took Algebra because it was required. I memorized and studied enough to pass the tests. I never took Calculus or any of the higher level courses…because I didn’t have to.

When I went to college, a general math course was a requirement. The class was in one of those huge auditoriums with at least 70 other students. I passed the class, barely…by studying for hours and memorizing without really ‘getting it’.

When it was over, I breathed a huge sigh of relief that I’d never have to take another math class EVER again.

Then we decided to homeschool and the prospect of teaching math…terrified me.

I tried to quell my fears by telling myself that Ray was good at math and he could handle the more difficult concepts. Or, that we could hire a tutor when it got too difficult.

All I’d have to do was teach them the basics.

But then I realized that I was copping out. If I’m not excited about or interested in math, how could I expect the boys to be? I don’t want to push my negative feelings about math on to their little shoulders.

I also realized that I’d be missing a golden opportunity…for myself.

By working and learning alongside the boys, I would get another chance to learn to love, or at least not loathe math.

After researching different curricula and talking with my homeschool mentor, we took the plunge and ordered the Alpha level of Math-U-See.

There is something for every learning style. There are videos for audio and visual learners and manipulatives and worksheets for hands-on learners.

The concepts are taught step-by-step: introduce, review, practice and master.

You don’t move on to the next concept until the student can teach it, demonstrating that they fully understand the logic behind it.

Build it. Write it. Say it. Teach it.

Joe loves being the teacher, so this may be perfect for him.

He loves telling people how to play a game-explaining the rules, demonstrating the play, praising the ‘student’ when they play the right way and repeating the rules when they don’t. Amazingly, he doesn’t get frustrated or hostile when he is teaching a new game to someone.

He loves showing me a new bug he found, telling me about where he found it, what it was doing and what it was eating. 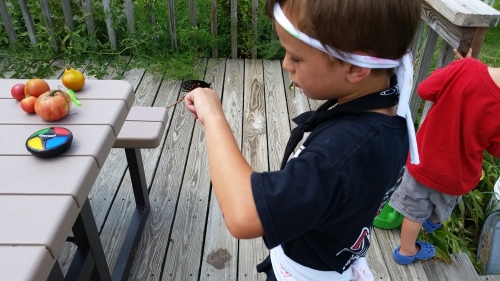 When I introduced our math lesson today, his eyes lit up when I told him he would be teaching Daddy what he learned. It made him more enthusiastic about the lesson.

The set came with an instructor’s manual and a dvd along with the student workbook and test booklet.

The videos are wonderful. To prepare for the first lesson, I read the corresponding chapter in the instructor’s manual and watched the video for Lesson One. It was about 15 minutes long. 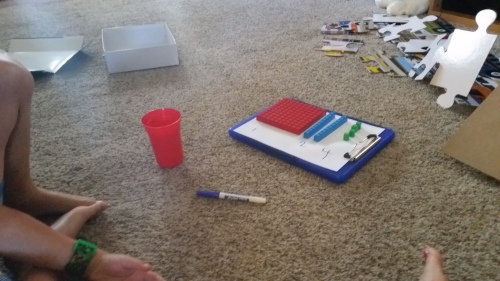 The blocks that come with the set are a lot like legos. There are ‘units’, fives, tens…all the way to 100’s.

This morning, when we watched the video for Lesson One: Place Value, both boys immediately wanted to use the manipulatives to follow along. They were having so much fun!

Joe: Let me do it by myself Mom. I’ll show you.

We’ll spend time working on understanding place value over the next week or more. Joe will progress to Lesson 2 only when he understands and can teach Ray, Jake or me the concept.

Jake will progress only when he can teach Ray, Joe or me the concept. Each will work at his own pace.

And we’ll practice the concepts we learn everywhere we go.

This entry was posted in Education, For the Kids, Homeschool. Bookmark the permalink.

2 responses to “Math Is Everywhere”