Ray and I were sleeping soundly when the first alarm went off.

The sun was nowhere in sight. The sky was dark, dark, dark.

By the time the sun finally broke the horizon, Pecky had been crowing for an hour…maybe more…every 3-5 minutes. 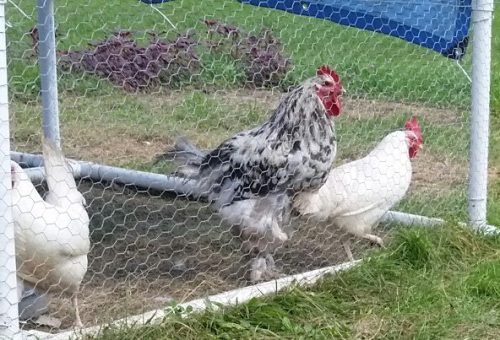 Yet, he doesn’t just crow at daybreak.

He crows when a car pulls in the driveway.

He crows when the Schwan’s man gets out of his truck.

He crows when we walk out with food and water, when we open the door and whenever he feels like it.

Now, apparently, he feels like crowing at 5am. On a Saturday.

Why does he do this?

Because there’s a change in the environment.

Because his internal clock is finally ticking.

Because he’s announcing to the homestead that he is here…just in case we forgot.

So when we want to get up early, we leave the door to the coop open. He’s able to strut down the ramp and wake us up.

But, when we want to sleep in, we shut the door at night.

And…as soon as we open the door in the morning…he’s out and crowing his little chicken heart out.

“Cockadoodledoo!”
Look what I can do!
Through the night and day
I have much to say

This entry was posted in Chickens!, Poetry, Writing. Bookmark the permalink.