“No, no Glitter,” whispered Nim in a sickly voice. “You go ahead to the meeting. I’m–I’m too weak to fly.”

Glitter looked down at Nim, a worried expression on her face. Nim was wrapped in a soft tissue slurping maple syrup and trying to eat a marshmallow. He looked…sick. What had she done?

“I’m so sorry Nim! I didn’t know you hadn’t eaten or I never would have locked you in that candy cell!” 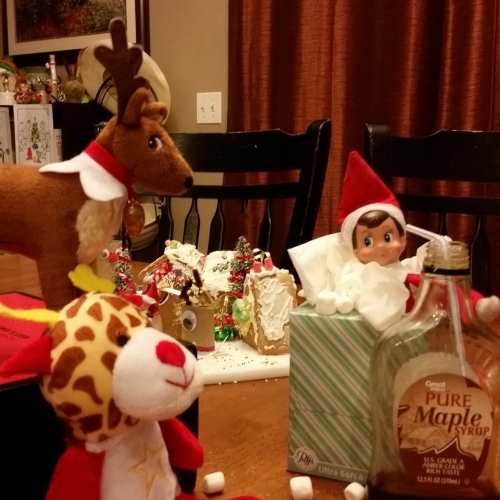 “It’s ok,” Nim coughed. “If only they’d been real candy canes. Just a few licks may have given me enough energy to make it back to the North Pole with you and give my report to Santa.”

“Oh Nim! I’ll take your report back with me and make sure Santa knows this is all my fault.”

“Thank you, Glitter. You are such a good friend,” said Nim as he closed his eyes.

Concerned and feeling guilty, Glitter took off from the window and flew as quickly as she could to the North Pole. She had not known Nim long enough to realize that he always ate enough candy, munched enough chocolate and slurped enough syrup to last through a day of observing the boys.

If only she had known, she may never have left him alone in the house.

She had no idea the mayhem he was capable of. 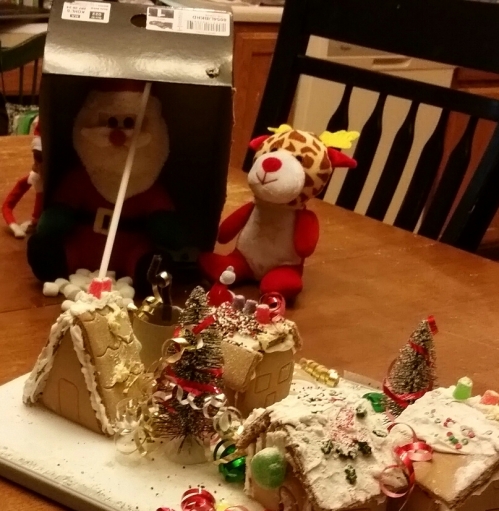 She’ll never see it coming! Nim thought as he hid behind his make-shift reindeer trap to wait for Glitter’s return.

Of course, Glitter did see it coming. Such an obvious “trap” would have fooled no one. Not even the youngest of Glitter’s herd.

“Nim? Is this supposed to be a joke?” Glitter called out.

Soft giggles was the only response.

“Well I guess this means you are feeling better,” she said as she walked closer to the trap. “What in the world?”

Glitter had just stepped in a sticky, gooey pile of icing. 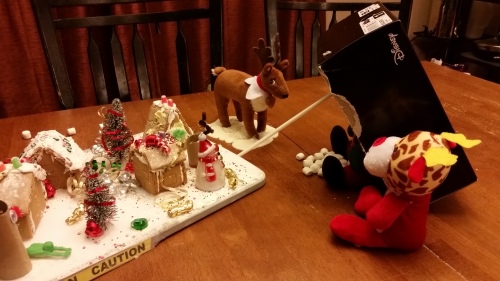 “MARSHMALLOW BLIZZARD!” shouted Nim as he flew to the light with a two big bags of mini marshmallows.

Glitter looked up just in time to see hundreds of white, pink, green and yellow marshmallows raining down on her head. She tried to gallop away, but the icing was drying and cementing her feet to the table. 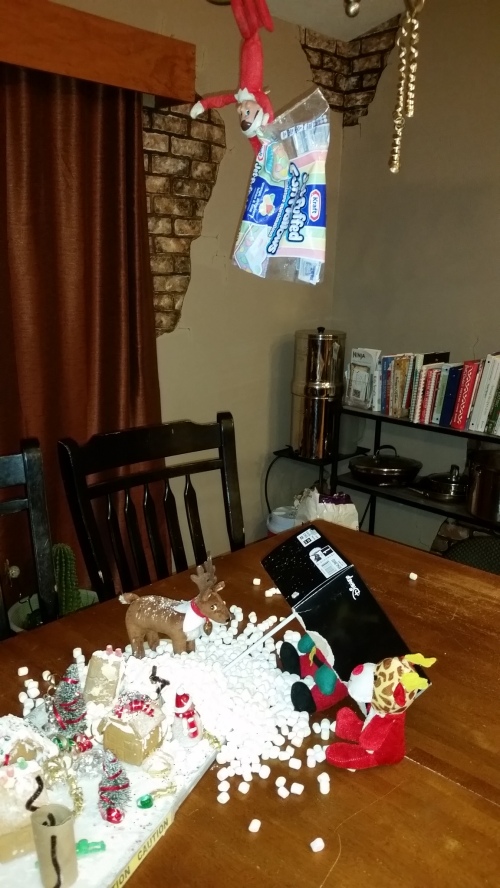 She was trapped in the real trap.

Nim hung upside down with the empty bags.

Nim gave her a merry smile. 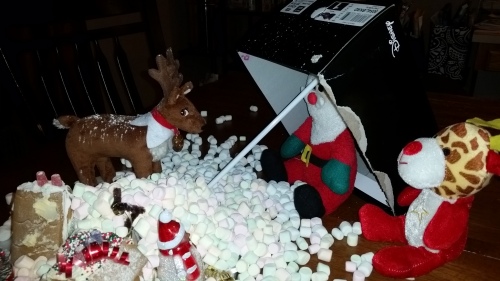 Nim’s Joke
What do snowmen eat for breakfast?
Frosted flakes!