“The boys will think it’s hilarious.”

“That may be true, but their parents will not think it is funny at all. And we are already in trouble with Santa thanks to you!!!”

Nim huffed and folded his arms.

“You are still upset about the marshmallow blizzard aren’t you?” asked Nim.

“Of course I am! What a mess you made! And…the boys were upset that you used ALL of the marshmallows.”

“Only until they realized they could still eat them,” said Nim defensively. “And I put the rest of them in this very festive bowl.” 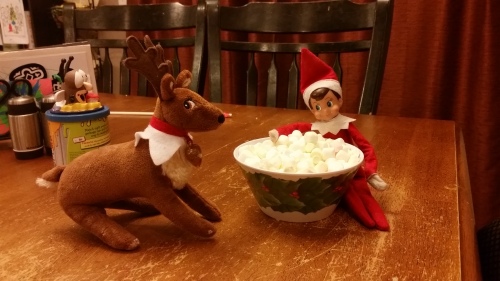 “It doesn’t matter. We are NOT going to toilet paper the tree and that’s final.”

Glitter immediately realized she’d made a mistake. She should have continued trying to reason with him instead of forbidding him.

“Ok,” he said a little too quickly and quietly. “We won’t toilet paper the tree.”

Oh dear, thought Glitter. What will he do now?

Nim, keeping his eyes on Glitter, made a dash for the bathroom. Glitter galloped after him, but he shut and locked the door before she could reach him.

“NIM!” she whisper-yelled as she head-butted the door. “Unlock the door this instant!”

“No!” replied Nim as he gleefully laughed.

Glitter was a planner and not very good at thinking on her hooves. But, when faced with the possibility of another lecture from Santa on the messes they’d–no, Nim had been making, she quickly came up with a plan to stop Nim.

Nim burst out of the bathroom with a large roll of toilet paper. Before he could react, Glitter had tackled him to the floor and stuffed him in the center of the roll…thinking she’d stopped him.

But Nim, who was good at thinking quickly, rocked back and forth until the roll of toilet paper started spinning and unravelling down the hallway and into the kitchen until it hit the desk.

Glitter stared open-mouthed horror at the mess she had made. Then, she saw the message at the start of the roll.

“I was only going to roll it out enough so they could read the message,” he said. “I agreed not to TP the tree and I meant it. A scout elf never goes back on his word.”

Glitter couldn’t help but think of the ways Nim had found a way to do what he wanted to do without actually breaking his word in the past.

“No,” she said. “You never do break your word. You just find a way around it.” 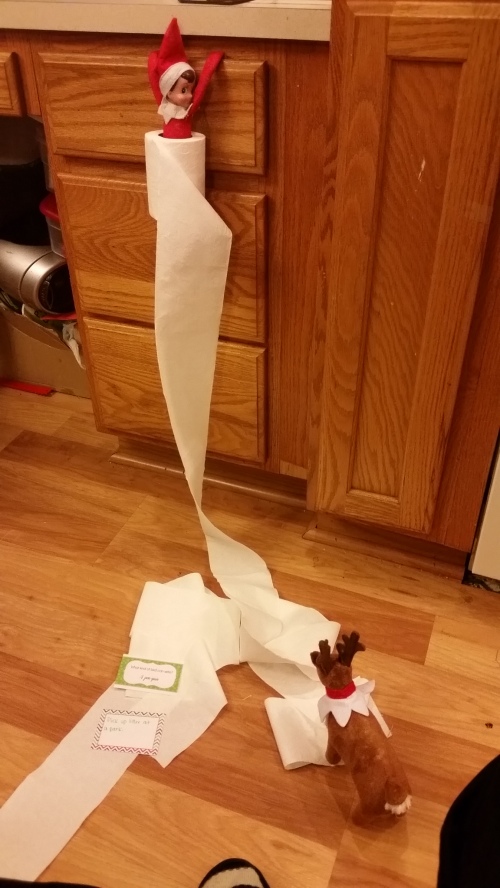 Kindness Task
Pick up litter at the park.

Nim’s Joke
What kind of bird can write?
A pen-guin!