“Yes. It will,” said Nim through clenched teeth as he tried to balance just one more roll on top of his toilet paper tower. As soon as he let go, the whole tower came tumbling to the floor…for the 3rd time that night. 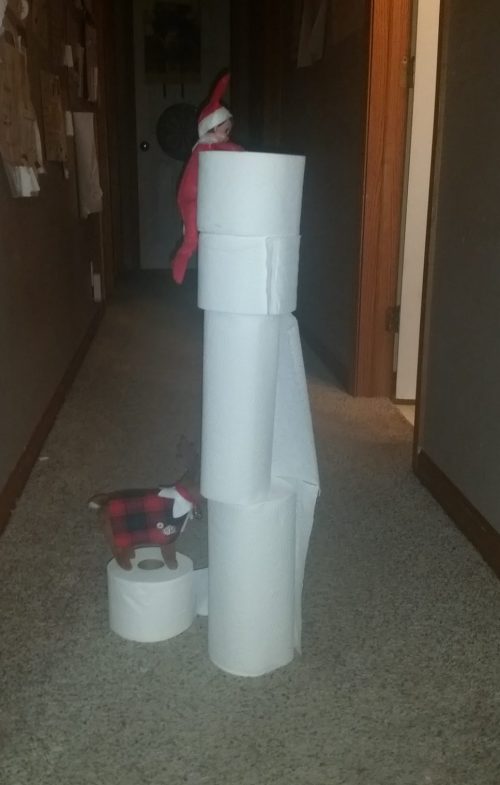 “Can we just do what I suggested?” asked Glitter.

Nim, who was still not quite over the shock of what Glitter’s suggestion had led to the previous night, scowled.

“I don’t know Glitter. I’m just not sure I can trust you anymore.”

“Oh Nim, you were the one who started it by dangling that rubber snake in my face!” Glitter laughed.

Nim’s scowl deepened, at least it tried to…but soon his sense of humor won out and he chuckled along with Glitter.

“It was still a dirty trick,” he said as he wiped tears of laughter from his eyes.

“Yes, it was,” Glitter said smiling and not looking at all sorry.

Nim got up from the jumble of toilet paper rolls on the floor and sighed.

“We could always make holiday pancakes like I suggested,” said Glitter.

“Or,” said Nim. “We could build an obstacle course for the boys!”

He flew excitedly to the pile of toilet paper. In a flash, he had them in a line blocking the hallway. 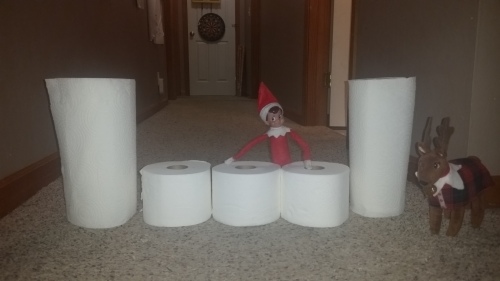 “First, they jump over these.”

Glitter jumped up and galloped to the fireplace where a few giant pipe cleaners lay discarded on the floor. She formed them into circles and set them on the ground in front of the line of toilet paper.

“Second, they hop in these with one leg. Like hopscotch,” she said.

Nim and Glitter both threw themselves into creating a fun obstacle course for the boys to complete when they woke up in the morning.

Glitter was so busy with the final obstacle – a line of traffic cones the boys would have to weave in and out of – that she did not hear a very quiet and mischievous scout elf sneak up behind her.

Poor Glitter suddenly found herself wrapped in gauze. Nim strung her up under the spider she’d tortured him with the previous night.

Glitter was startled, but not afraid.

“But Nim, I’m not afraid of spiders. Especially fake rubber ones.”

Glitter looked up and over her shoulder and saw a long, mechanical black and white striped snake moving above her. 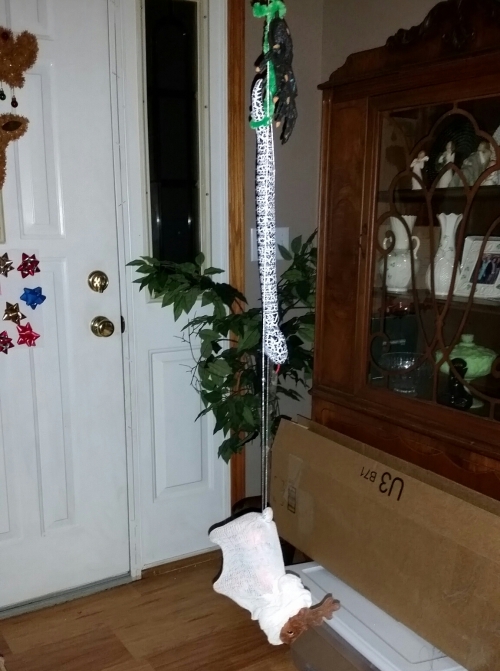 “You know the boys will just cut me down in a few hours,” said Glitter with a slight tremble in her voice.

“Yes,” said Glitter, trying to keep the hysteria out of her voice. “Well, I guess you also forgot that I can touch you. Which means that I can move you wherever I want. All throughout the day.”

Glitter didn’t reply. She just looked at Nim and smiled, making him worry. He did not like that glint in her eye.

Before Nim could finish his thought, the shuffle and pounding of feet could be heard coming from the bedroom.

The boys were up.

Nim’s Joke
What do you call an old snowman?
Water! 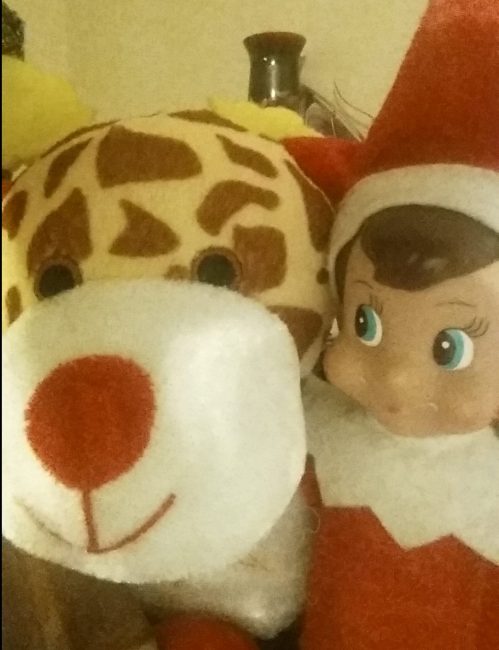