This year, I won’t get angry.

I won’t throw a fit and stomp my feet.

I won’t let the Japanese beetles get the best of the homestead.

We’ve learned from our mistakes.

1). Using a “trap” to attract the beetles away from the plants ends up doing more harm than good.

Sure, the traps work as advertised, but they draw even more beetles to the property than would otherwise be there. 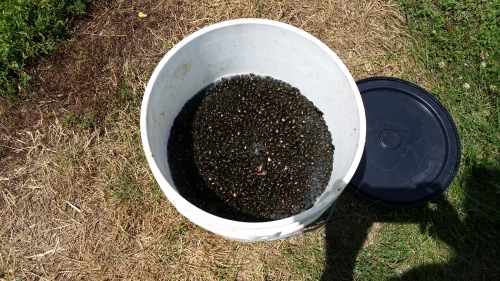 Last year, we filled several 5 gallon buckets due to the traps, but it made little to no difference in the damage they did.

2). Waiting until the beetles have overtaken every tree, bush and shrub means having and overwhelming feeling of hopelessness and frustration.

Last year at this time they were horrible. So far, they haven’t been as bad.

We are staying ahead of them this year. Every beetle we drown is a beetle that won’t reproduce.

Each morning and evening we go out on patrol. It is a family chore. We work together as a team.

Ray and I are armed with buckets of soapy water.

Joe and Jake are the spotters.

We are ahead of the game, at least for now.

Looking at pictures from last year, they are not as bad. There are fewer beetles and the damage done has been minimal…so far.

We will be vigilant.

We will stay the course.

This entry was posted in Garden Stories, Haiku, Poetry, Writing. Bookmark the permalink.