Nim and Lil returned from the North Pole to find Glitter fast asleep under the tree with cookie crumbs stuck to her fur.

“Maybe this is for the best,” said Lil. 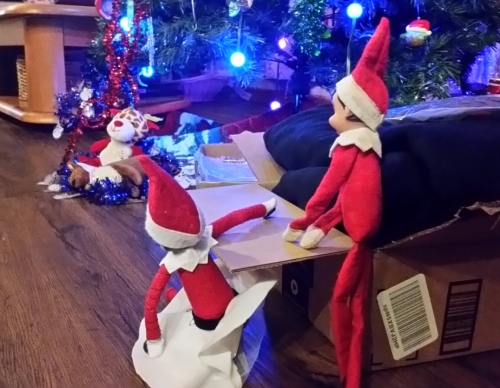 “I still can’t believe she made such a mess,” said Lil shaking her head.

Both elves were happily anticipating putting one of their many projects in action. So far, the season had been chaotic and all they’d been doing was cleaning up other people’s messes and running interference between Glitter, Barrel and Santa.

“Nah, we did that last year,” said Nim. “We could hang streamers all over?”

“That’s too close to toilet papering the Christmas tree,” said Lil. “We promised Santa we wouldn’t do that again.”

“Oh yeah,” said Nim as he absently played with Legos.

“Hey!” said Lil. “Let’s build a big tower out of Legos and fill it with candy!”

Nim smiled and flew to the Lego table, pulling out armfuls of blocks to build their tower. Lil zoomed to the kitchen to search for candy. 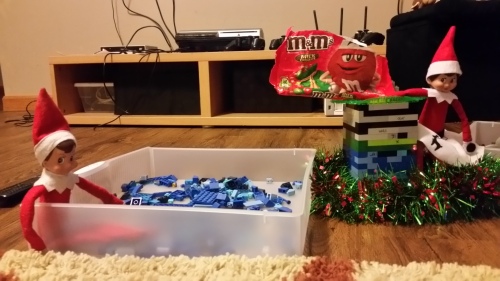 Lil was just pouring a bag of red and green M&Ms into the tower when Glitter woke up. She stretched and brayed.

“What are you doing?” she asked with a yawn.

“We built a tower of Legos and filled it to the top with M&Ms,” said Lil.

“Oh no!” said Nim pulling scraps of paper out of his pocket. “We forgot to hide the jokes!”

The two elves zipped off to hide Christmas jokes around the house.

As they were hiding the last joke, they heard Glitter singing.

At the end of her tune, Nim and Lil heard the sound of hundreds of M&Ms scattering across the floor.

Both elves raced to the scene of the crime to find Glitter quietly munching on M&Ms as if she hadn’t just destroyed all their hard work. 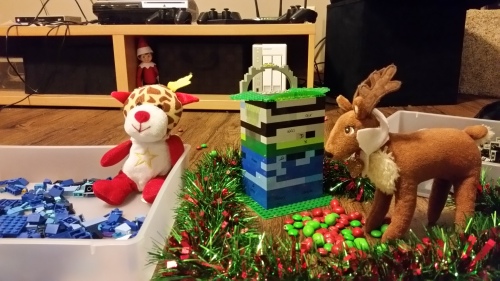 Suddenly, all of the lights in the house came on. Nim and Lil quickly hid as the family came bounding down the stairs.

Glitter stood in the middle of the mess.

“At least we won’t get the blame,” said Lil. 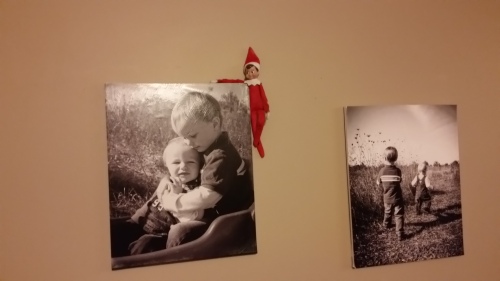