“Did you remember the sprinkles?” asked Lil on their flight back from the North Pole.

“What about the red hots?” asked Lil.

“Lil, I have everything,” said Nim with a laugh. “Why are you so worried?”

When Nim and Lil got to the North Pole that night to file their report, Santa had already heard about the M&M incident and he was not happy.

“Ho, ho, ho,” he had said. “I hear Glitter has been causing quite the ruckus.”

He had then asked the elves to deliver a message to Glitter. She is not allowed to “help” for the next few nights until she learns to behave and stop making messes.

“Yes, I remember,” said Nim, frowning at the thought of giving up the Top Shelf Elf status.

“Then you know how disappointed poor Glitter is going to be,” said Lil.

Lil was right. Glitter would be crushed knowing that she was in trouble with the Big Guy.

“And we have to be the ones to tell her,” said Nim with a heavy sigh.

“Exactly,” said Lil as they zipped through the window.

“Where is she?” asked Nim when they landed.

The two friends searched for Glitter and finally found her playing checkers with Leonard, the odd looking stuffed reindeer…or was he a giraffe? No one really knew. 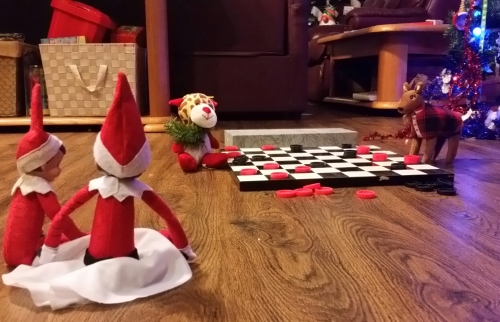 Oh, Leonard the Reindeer
Was the strangest looking guy
With his red body and spotted head
And two wide and glossy eyes

Oh, Leonard the Reindeer
Doesn’t say that much at all
He just sits and stares out into space
But we’re having quite a ball

Nim and Lil looked at Glitter with concern.

“Maybe we will tell her what Santa said later,” said a wide-eyed Nim.

“I really thought she’d snap out of it after the M&M tower,” said Lil.

“I say we just leave her here,” said Nim. “She seems pretty…er, occupied.”

Lil shook her head as she watched Glitter jump 4 of Leonard’s checkers while still humming her revised version of Frosty the Snowman.

“Ok,” said Lil. “I guess we can tell her what Santa said later.”

Nim and Lil raced to the kitchen to take inventory of their supplies.

“Check,” said Nim pouring a bag of snow from the North Pole into a “planter”.

“Check,” said Nim pointing to a a bowl of red hots.

“I can’t believe we’ve never done this before,” said Lil.

“I know,” said Nim. “It’s a perfect surprise for the boys. A garden in winter!” 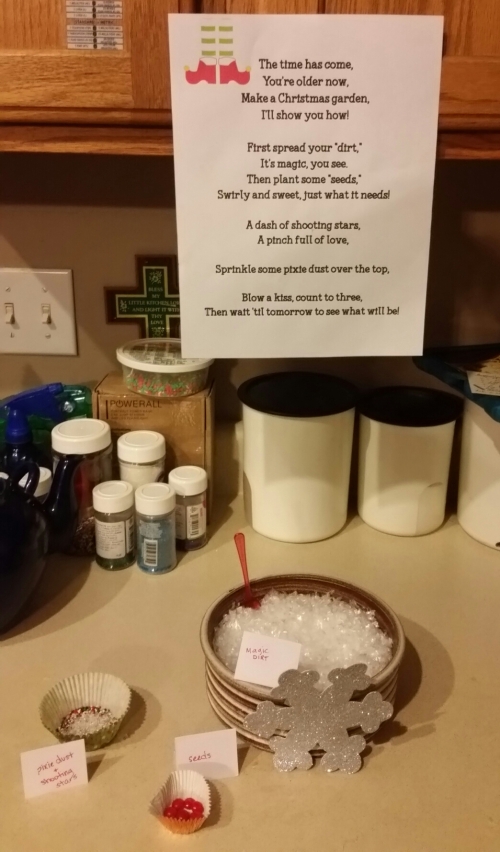 The elves were so excited about their surprise that they completely forgot to tell Glitter what Santa had said.

And by the time they remembered…it was much too late.