Around noon the following day, a postcard arrived. It seemed innocent enough. The family called it “junk mail”, but the elves knew by the red, green and white printing that it was from Santa. 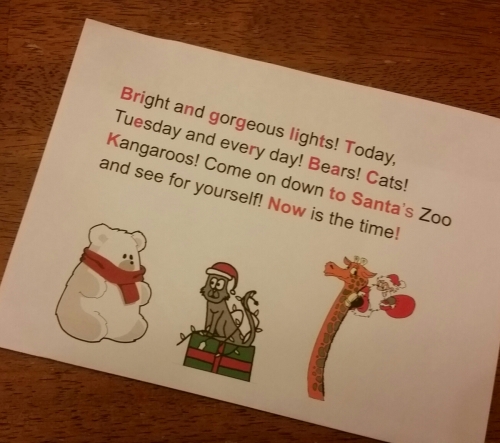 Nim and Lil could just make out the code from their spot in the window.

Bright and gorgeous lights! Today, Tuesday and every day! Bears! Cats! Kangaroos! Come on down to Santa’s Zoo and see for yourself! Now is the time!

“I can’t see it very well,” said Nim craning his neck. “What does it say Lil?”

“Scratch the letters into the snow while I read them,” said Lil. “Bri, n, g,”

“Bring Glitter back to Santa’s now!” said Nim. “She’s going to lose it.”

The elves looked at each other without their usual twinkle of mischief.

“Bring her back? Oh he must be so upset!” said Lil.

“Well she has been causing no end of trouble ever since Barrell left,” said Nim.

Lil nodded in agreement and they waited for the rest of the day until it was time to go give Santa their report.

“At least the boys have been on top behavior today,” said Nim as they eased their way inside.

“Yes, did you see Jake pick up when his mom told him to…without grumbling one time?” said Lil.

“Or how about when Joe brushed his teeth without being asked to?” said Nim.

Both elves smiled and then slowly approached a sleeping Glitter.

“How are we going to get her to go with us?” whispered Nim.

Lil smiled and whispered, “I have an idea. Follow my lead.” 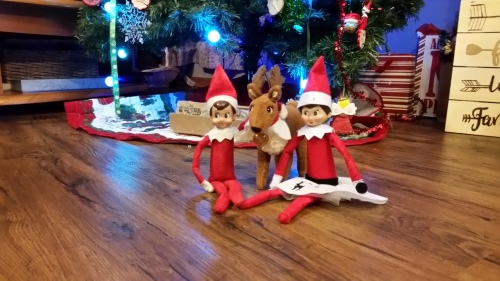 “Hey Glitter,” said Lil. “You should come with us to the North Pole tonight.”

Glitter raised her head and yawned.

“Yeah,” added Nim, unsure of where Lil was going.

“But, what about the boys?” asked Glitter. “Won’t they wonder where I am?”

Nim and Lil shared a look that said ‘Now she’s worried about the boys?’

“Besides, I’m sure you don’t want to miss the Maple Syrup Shake-ups that the kitchen elves are making tonight as a treat for everyone,” said Lil.

It wasn’t really a fib, there were going to be Maple Syrup Shake-ups at the North Pole and the elves knew that it was one drink no reindeer could resist.

Glitter’s ears twitched and her tail moved a wee bit, a sure sign that she was excited and ready to go.

“You go ahead and stretch your legs outside Glitter, we’ll be right there,” said Nim.

“What’s up?” asked Lil as soon as Glitter left.

“We may not be back in time to do anything fun for the boys,” said Nim.

“Let’s just leave the coloring project we were going to do last night before we were so rudely locked out,” said Nim.

Nim placed two Christmas Elf puppet pages on the table with a new box of crayons for each boy. Lil added a box of fasteners for the arms and legs and dashed off a quick note.