“You know,” said Lil the next night. “I’m happy that Glitter is better, but I do miss those Christmas carols.”

Nim watched as Glitter swept up tinsel that had fallen from the tree using Barrel’s tail. Far from being upset, Barrel barked in time to Jingle Bells and enjoyed the ride.

“I almost hate to put tonight’s plan into action,” said Lil. “Do you think it’s too soon?”

“I don’t think so,” said Nim. “Besides, we have to step it up a notch if we want to keep the Top Shelf Elf trophy title.”

Lil knew Nim was right, but she couldn’t help but be a little nervous about Glitter’s reaction to their plan.

“Let’s get started while she’s distracted with tormenting Barrel,” said Lil with a smile. Barrel was enjoying every minute of his “torment”.

Nim and Lil snuck off to the boys room and started collecting the Hotwheels, Matchbox cars and any other toy with wheels they could find. Slowly and quietly they laid each vehicle in a line from the boys room and through the living room.

“The coast is clear,” whispered Nim.

Floating a little above the floor, the two elves silently put the cars and trucks all the way up to and around the Christmas tree.

“And just what do you two think you are doing?” Glitter boomed with a hands-on-her-hips look on her face.

“You forgot to leave a space for Barrel and I in this parade,” said Glitter as she trotted to the middle of the line of cars.

Lil’s mouth hung open as wide as a snowball.

Barrel raced to Glitter who shooed him to the back of the line. 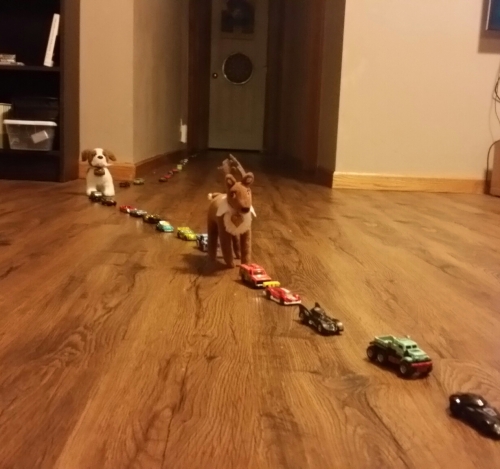 “Breakdown into a quivering ball of nerves?” asked Glitter.

Nim and Lil nodded in unison.

“No,” said Glitter. “I think my trip into madness is well behind me. I’ve learned that a little mischief is quite ok…even fun.”

“Yay!” Nim and Lil said, jumping and spinning around.

“Besides,” said Glitter. “We have to keep that Top Shelf Elf trophy for our team.”

As Nim and Lil got into the lead car, they couldn’t help but smile.

“If this is the new, improved Glitter,” said Nim. “Then all the craziness was worth it.” 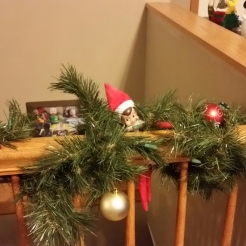