“Very good job team,” said Santa as he smiled down at the four elves.

“Thank you sir, Mr. Santa.” Pixie had not quite gotten used to the big guy yet.

“I’m glad to see you two getting along again.”

Nim and Lil turned pink, embarrassed by their behavior over the past weeks.

“Good, because I have some important news that affects you all.”

Santa’s suddenly serious tone worried the group. Was something wrong?

“Is that all?” asked Nim with relief. “Yes, and we have such a fun day planned!”

“Yes, yes. That’s very good, but that is not all.” Santa spoke in a voice he used only for the most grave Elf Mishaps.

“I’m afraid that we must plan for the inevitable. This may very well be the last year Joe believes in the magic.”

Nim and Lil looked at each other in shock. 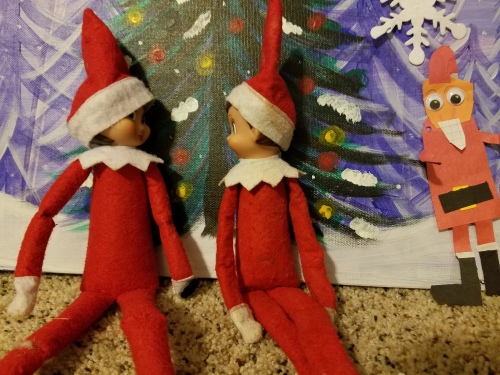 “It’s true,” said Pixie. “I heard him when I came out for Jake’s birthday in October. He was asking questions about elves, hobbits and even…the Tooth Fairy.”

“But, he knows us. He sees what we do each night,” said Nim.

“Sometimes, even the clearest vision gets clouded with doubt,” said Santa sadly. “I’m afraid Joe is growing up and will very soon have no time for Santa and his elves.”

As the four friends flew back to the house, Lil couldn’t help but feel a heavy weight in her heart. What would happen to them when Joe stopped believing?

“INCOMING!!!!” Figgy dive bombed toward the window and missed, skidding to a halt in the snow covered garden bed.

“Locked? How can it be locked?” asked Pixie.

All four elves gathered on the window sill and tried in turn to open it, but it was shut tight.

“I don’t believe it. They never lock this window,” said Nim.

“Maybe Glitter will let us in. Do you see her anywhere?” Figgy peeked inside, searching, but Glitter was nowhere to be found.

“Yeh could come ‘n join us by da fire,” said a gruff voice from the garden.

Startled, the elves turned as one. A gnome was standing at the edge of the garden staring at them.

“I didn’t know those gnomes were real!” Nim whispered excitedly.

“A fire does sound nice,” said Pixie, the first to recover from the shock of a talking statue.

“And I am a little chilly,” added Figgy.

Nim glanced at Lil who shrugged. They all followed the gnome.

When they reached the small hut in the garden, they found a crowd of gnomes huddled around a fire.

The elves glanced at Phil. He didn’t have any food in his hands.

It was then that they noticed all the gnomes slowly surrounding them.

“Charge!” cried the horde of gnomes. 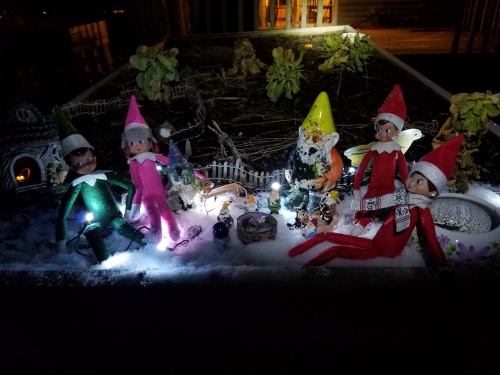