“We were scared almost to death!” said Lil, glaring at Glitter. “I didn’t even know there were garden gnomes, let alone that they were your friends!”

“I still say it was a dirty trick.” Nim scowled at Glitter.

Glitter just laughed harder. “Oh Nim, you should have seen your faces!”

After being terrified and nearly roasted alive over a small gnomish fire, the elves screamed as Glitter galloped out to the garden laughing so hard she brayed and called the gnomes off. Apparently, she had orchestrated the whole thing.

“What are you two laughing about. You were just as terrified as we were,” said Nim.

But Figgy and Pixie were not laughing about the gnomes. They were slowly preparing for the night’s mischief.

“What are you two doing over there?” asked Lil, finally noticing their secretive movements.

“Us? We aren’t doing anything,” said Pixie with wide, innocent eyes. 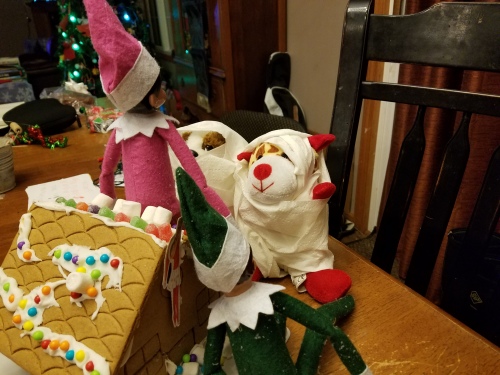 “Oh. My. Goodness. What on earth did you do to Barrel?!” Lil exclaimed.

Barrel was completely covered in toilet paper with only his eyes, nose and tail free from the white wrapping. As the original trio gaped in surprise at the little dog, a cotton ball sailed toward them and hit Glitter on the antlers.

By the time the elves and Glitter were done, the entire living room, kitchen and hallway were covered with cotton snowballs, Barrel had escaped and Nim, Lil, Pixie and Figgy were tangled in tinsel.

Glitter was breathless with laughter…until they heard the sound of shuffling steps and soft sighs.

“They’re up! Everybody freeze!”