Lil, Figgy and Nim sat hunched over a pile of sugar cubes, thinking.

“Too much like the Lego village, er, disaster.” Lil eyed Nim and giggled.

“Underwear on the tree?” offered Figgy.

“That’s it. We are officially out of ideas.” Lil put her small face in her hands.

“Chocolate always helps me think of good ideas,” said Pixie from inside the refrigerator.

“Aaaaand…here it is!” Pixie gave a mighty tug and pulled out a jumbo bottle of chocolate sauce.

Red and green apples tumbled to the floor, rolling in every direction.

“Oops.” Pixie landed with a squelch on the bottle of chocolate sauce. The lid popped off with a CLICK and thick syrup glooped out onto the floor.

Glitter came galloping into the kitchen with a red pipe cleaner trailing behind. “Is everyone ok? I heard a crash.”

“Everyone is fine,” said Nim. “Pixie had an…accident.”

“Glitter,” said Figgy. “Why do you have googly eyes on your antlers?”

Glitter jingled her collar. “I was looking for a craft.”

“I’ve got it!” interrupted Pixie.

Lil, Figgy and Nim floated over to Pixie while Glitter cantered behind. Pixie had arranged all of the apples in a winding line on the bookshelf. 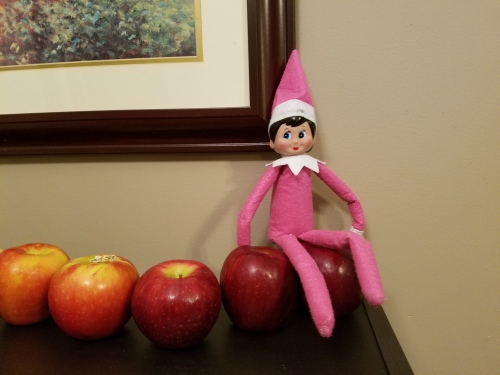 “Pixie, what are you doing?” asked Glitter.

“The apples represent the caterpillar.”

“The what?” Nim crinkled his brow.

“Figgy, you will be the One Apple.”

“Wait a minute,” said Lil. “I think I know this story. Something about a caterpillar…”.

“I’ll be the chocolate bar.” Lil waved her hand at her already chocolate covered hat.

“And Glitter, you can be the beautiful butterfly!”

The team was smiling once again.

Everyone except Nim. “This is the boys’ favorite book and I don’t have a part in it?”

“I have the perfect job for you, Nim.” Pixie handed Nim a small stick with a string.

Nim frowned at the stick. “Well, that’s not in The Very Hungry Caterpillar. And what’s going on with the celery at the end?”