Nim let out a big yawn. “I thought they would never go to bed.”

“Well, Harry Potter and the Chamber of Secrets is a looooong movie.” Lil stretched.

“And the boys LOVE it.” Glitter flexed.

“And Mom and Dad fell asleep on the couch,” added Figgy. “The boys took full advantage.”

“Which gave Figgy and I an idea,” Pixie danced on her toes. Lil, Nim and Glitter looked at the pair expectantly.

“A re-enactment of the best scene in the movie,” said Figgy with a flourish of his hands.

Nim stretched like a cat. “And what’s the best scene in the movie?”

Pixie shook her head. “Nope, you are Malfoy Sr.”

Lil slumped. “Why do I have to play the villain?”

Figgy fluttered over to Nim. “Nim will play Harry.”

Lil scowled. “Why does Nim get to play the hero?!”

“I am playing Ron,” said Pixie.

Lil glared. “Why do you get to play the sidekick!??

The elves smiled, excitement in the air.

“Wait, aren’t you forgetting someone?” asked Glitter. “Who is going to play Dobby?”

Pixie and Figgy smiled with a mischievous gleam in their eyes and turned to Glitter. Nim and Lil giggled when they realized who was going to play the house elf.

“Can it,” grumbled Glitter. “I’ll play the little gremlin, but I would have been a better Dumbledore.”

“Hey!” protested Figgy. “I am going to look great with a beard!”

The group threw themselves in to making costumes and setting the scene. After several small skirmishes and a few huffy tantrums, they had the scene set up perfectly.

“Why couldn’t we have started the scene when they are all in Dumbledore’s office?” whispered Nim.

“My arm is going to get sore pointing this wand at Harry all day,” Lil groaned.

“Shhhhhh!” hissed Figgy. “I hear them. Places everyone!” 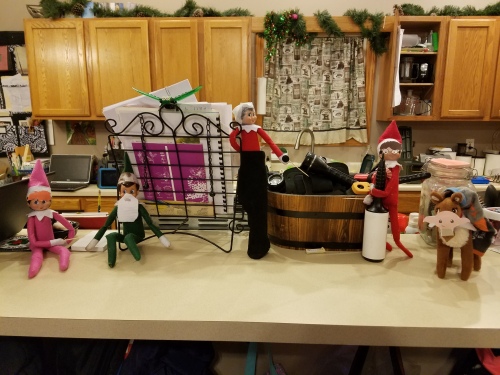