“Good grief that is a lot of chocolate!” Figgy watched as Glitter pulled a sleigh filled to the top, and overflowing with Hershey kisses.

“Well. We have to up our game tonight,” said Pixie. 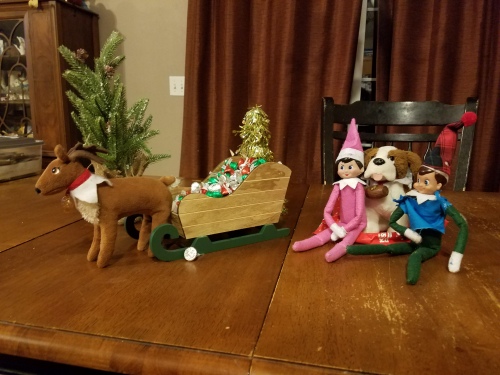 Figgy and Pixie had been so excited when they’d finished the confetti and streamer surprise. They were overjoyed when the boys came out and laughed at the trap they’d made for them. It had worked! It was perfect!

And then, when Jake went to brush his teeth, they heard Joe whispering to his mom.

“Hey Mom, thanks for the decorating our door.”

She denied having put it together, but he didn’t believe her.

“At least he was laughing,” said Glitter. Little comfort that was.

Barrel nudged Pixie with his soft nose as if to comfort her. She reached down and scratched him behind the ears and noticed something shiny on his collar. “What’s this?”

Figgy floated over. “Oh, that’s a collar. Jake made it for him yesterday.”

“It’s so shiny and crinkly,” said Pixie. “I wonder what it’s made of.”

“Tin foil,” said Glitter, tossing another Hershey’s Kiss out of the sled.

Pixie’s eyes gleamed, a mischievous smile on her face. She pointed to the pile of Kisses. “Uh, Figgy…can you help me set these up? In the kitchen?”

“In the kitchen?” Figgy frowned. “But I thought we were going to put them in the windows.”

Pixie stared, wide-eyed at Figgy until he understood.

Rolling her eyes at his obvious I’m-up-to-something face, she led him to drawer under the microwave.

She smiled. “Weeellll,I thought maybe we could have a little fun and wrap Glitter up like a Hershey Kiss.”

Figgy jumped up and down. “Genius! We can put a sign in front of her that says “Free kisses!”

Figgy zipped his lips and they got to work on the sign. They had just placed it on the table when they heard clopping behind them.

“I think you are forgetting something.”

Pixie and Figgy turned. Glitter stood tapping her hoof and…was that a smile?

Nervously, Pixie asked, “What would that be?”

“Rrrrufff!” Barrel dropped a roll of tinfoil, grabbed the end and raced first around Pixie and then around Figgy. He was so fast, they barely had time to blink before they were secured in the foil…just like a Hershey Kiss.

Glitter cleared her throat. “Reindeer have excellent hearing. She winked and tramped away with Barrel at her heels. 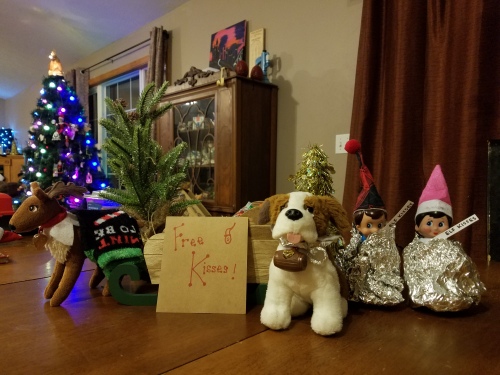