Santa’s office was crowded, stuffy and tense. Pixie and Figgy stood, head bowed, next to Glitter while Nim and Lil explained what had happened with the cookies.

“Apparently, Joe and Jake made their mom try Figgy’s…experimental cookies and, well, let’s just say it was not good. Not good at all.” Lil nudged Nim.

“Right,” he said, nodding at Lil. “On the bright side, Joe and Jake both enjoyed baking and decorating the cookies.”

Santa tapped his shiny black booted foot on the floor. He looked from Pixie to Figgy and from Figgy to Nim and Lil.

Figgy cleared his throat. “Well…at least it got a laugh…”. Figgy gulped at Santa’s expression and looked at his toes.

“I don’t know what happened to cause the allergic reaction, Santa. All of the ingredients were from their pantry so we just assumed…”. Pixie trailed off, looking sorrowfully at Figgy.

“Ahem,” said Nim. “If I may, sir? I think it was the amount of cinnamon used in combination with the cayenne pepper and curry powder. It was very…potent.”

“I’ wa ike eaing a ‘ag o’ Red Hos,” said Glitter. She too had tried one of Figgy’s experimental cookies…much to her and her tongue’s regret. 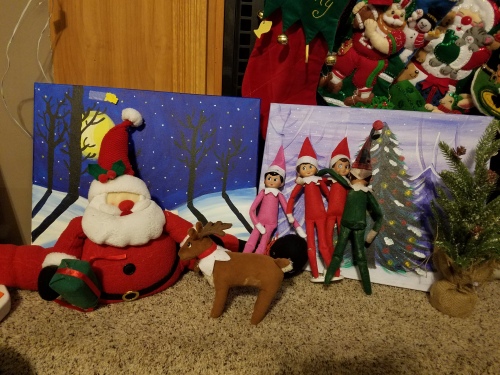 “No, no, no,” said Santa. “You and Nim are Chief Mischief Makers now. It’s nice that you are dropping in to help now and again, but this is a problem that Pixie, Figgy, and Barrel must solve…on their own”

“What about Glitter?” asked Figgy. “Won’t she be coming back with us tonight?”

For the first time that night, Santa’s smile returned. “Glitter has some…other matters to attend to tonight.”

All thoughts of Glitter, Nim, Lil and even Santa’s displeasure fled as soon as they landed on the kitchen table.

Barrel sat munching on a blueberries, a note from Joe under his back paws. A note that sent chills coursing down their little spines and drained the color from their tiny faces.

I know you are really the elves. 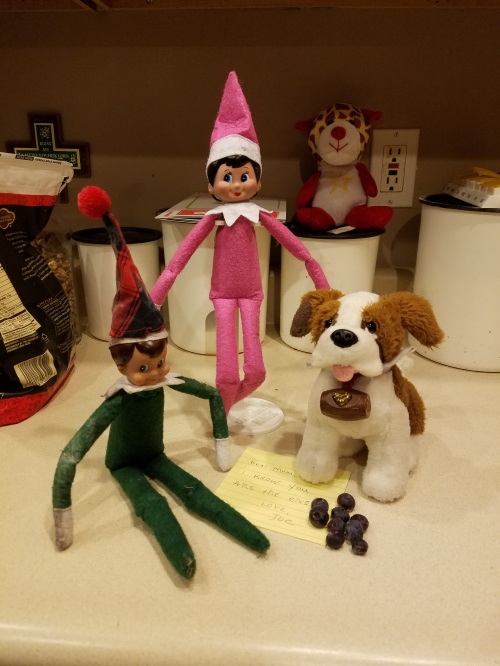 Finally, Pixie broke the silence. “Forget about this Figgy. Focus on tonight and what we are going to do.”

“Forget about it?? Pixie, it’s right there. In writing. Joe doesn’t believe in us!!!”

“Her burnt tongue? Her watering eyes? What can we do to erase those memories, Pixie?”

Pixie scowled and picked up a blueberry. “With that attitude, nothing. So let’s put our heads together and think of something.”

PLOP! She threw the blueberry at Figgy’s head.

Figgy picked it up, ready to give Pixie a piece of his mind. Suddenly, his face lightened and he grinned. “Is there more fruit in the fridge? Because I have an idea.”