“Er, what is that, Figgy?” Pixie’s head tilted from side to side, trying to figure out what Figgy was painting.

Figgy looked at her in disbelief. “It’s Santa.”

She moved further away.

She stood on her head.

“Oh, uh, of course. I see him now.” Her tone was less than convincing, but Figgy just shrugged. Some elves just couldn’t see true art. 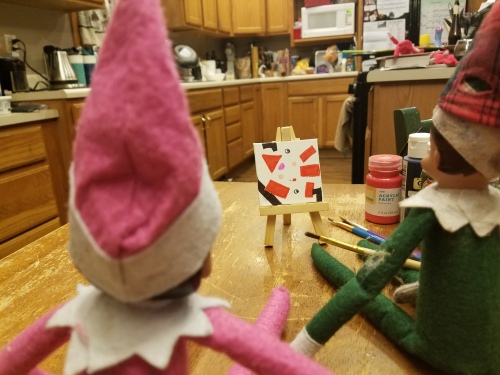 Pixie smiled and got back to her painting of the boys, continuing their conversation about what Glitter could be up to. They had thought of some pretty fantastical excuses for her behavior.

“Maybe she’s training for a job on Santa’s team.”

“Or maybe she’s planning a big surprise party to celebrate the end of the season,” said Figgy. 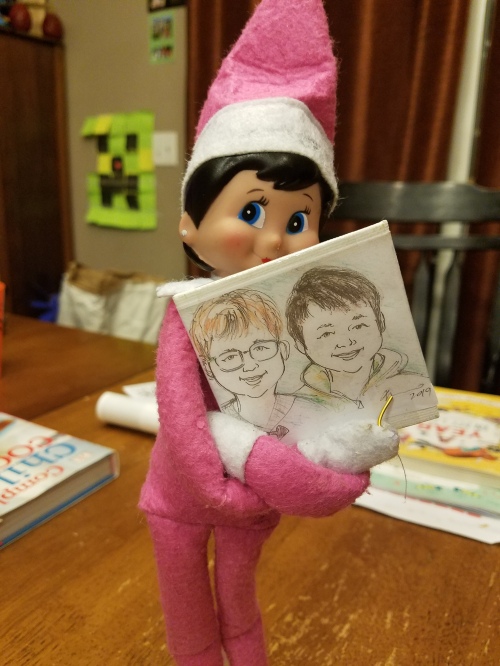 Pixie stopped painting mid-stroke. “Or maybe…she’s training a super secret network of elf spies to make sure the toymakers are doing their jobs correctly.”

“No, no. Hear me out. Did you see the quality of some of those toys last year? The brittle plastic? The shoddy craftsmanship?”

“But that was not the toymakers doing, they’re not in charge of ordering materials. That’s the Santa’s Supply Staff’s job.”

Figgy gasped. He’d forgotten about ‘The Recall’. It had been a big scandal in the Toymaker’s Workshop. Santa’s Toymakers had tried to cover it up but, unfortunately, a blabbermouth named Buzzy told his friend Gabby who told her friend Squeaker who leaked it to the rest of the North Pole community.

“Santa was so mad,” said Figgy. “I’d never seen him lose his temper before.”

“I know,” added Pixie. “When he said ‘No candy canes for any of the toymakers at dinner,’ I knew it was serious.”

“Poor Toymakers could only have gumdrops, chocolate trees and lollipops for dinner that night.” Figgy shook his head sadly.

A bright light flashed at the window followed by a loud crack. Figgy and Pixie jumped, knocking over paints and canvases.

“What was that!?” whisper-shouted Pixie. Figgy peered out the window…and gasped.

Pixie peered over his shoulder. “It’s Glitter, but what are those things prancing around her legs?” 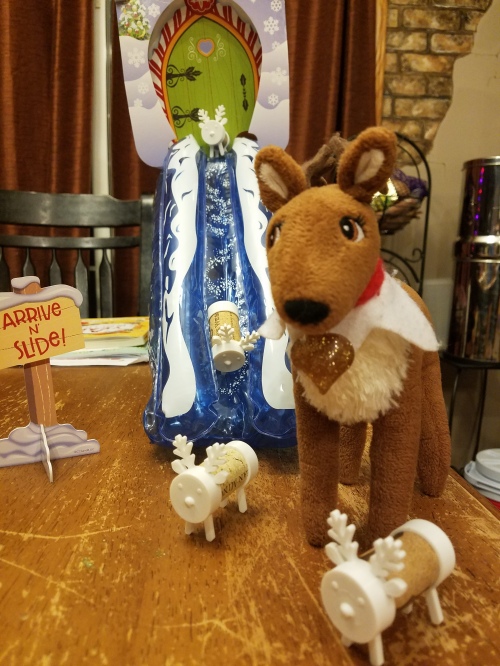 “Tiny reindeer!” shouted Figgy, bouncing on his toes. “Aren’t the so cute!?”

The two elves stood aside as Glitter and her three tiny reindeer trotted into the kitchen.

“Pixie, Figgy,” said Glitter proudly. “I’d like you to meet my new charges.”

“An’ I’m Rudolph Junior.” Rudolph Junior’s nose was slightly pink and glowing, just like the original Rudolph had when he had been a young calf.

“Glitter, is this what you’ve been up to?” asked Pixie.

“Yes, Santa put me in charge of training the next herd of Reindeer Pets.” Glitter cocked her head. “You seem disappointed, Pixie. What did you think I was doing?”