“Let’s put the slippers under the tree,” Pixie directed Nim and Lil, who were each holding a new pair of Christmas slippers. 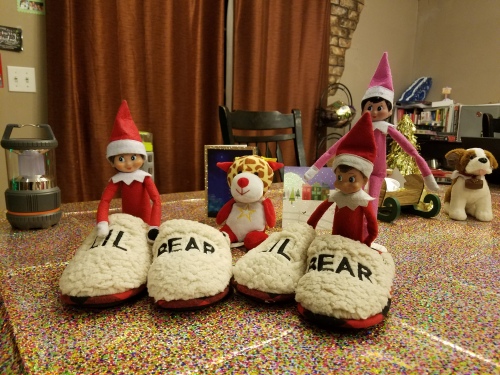 “I think we should sneak into their room and put them at the foot of the bed,” said Figgy.

Jake was a light sleeper. She was afraid they would wake him up if they went in the bedroom.

A loud and shocked gasp came from the hallway. The elves turned as one. Four pairs of eyes widened. Four mouths dropped open.

The elves froze and dropped to the floor. 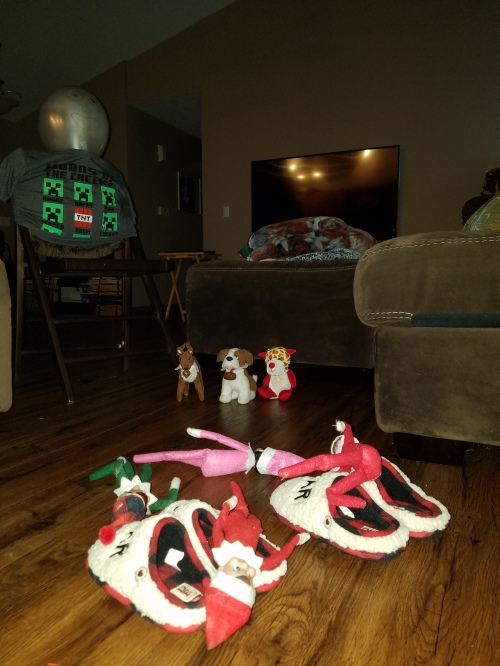 “It’s too late for that.” Glitter came cantering to the tree, Barrel bouncing behind her. “He’s been standing there for the past 5 minutes. He knows.”

Slowly, the elves stood and looked at Joe who was staring in shock at Glitter and Barrel. “Y-you’re all real?”

Pixie burst into tears. “It’s over! Now we’ll be cast out from the Mischief Maker program.”

Figgy patted her on the back, tears streaming down his face. “We’ve broken the rules. We’ve f-failed.”

Lil took a deep breath. “We’re part of a group called the Mischief Makers, Joe. Santa founded the program as an extra Christmastime treat for children all over the world.”

“We are not supposed to let our assigned kids see us move,” added Nim. “They are meant to wonder at the magic. To believe…without seeing. Without proof.”

Glitter looked at Nim and Lil. “Isn’t there anything we can do?”

“Wait!” said Lil, turning to the group. “What if Joe promises not to tell anyone?”

Pixie’s head popped up. “Would that work?”

“Lil,” said Nim in a warning tone. “That’s never been done before. It’s against every rule in the book. Literally.”

“I know, I know. But, hear me out. What if we ask Santa to make an exception for a special case?”

Lil floated up to Joe and looked him in the eye. “If we can get Santa to agree…will you help us next year, Joe?” 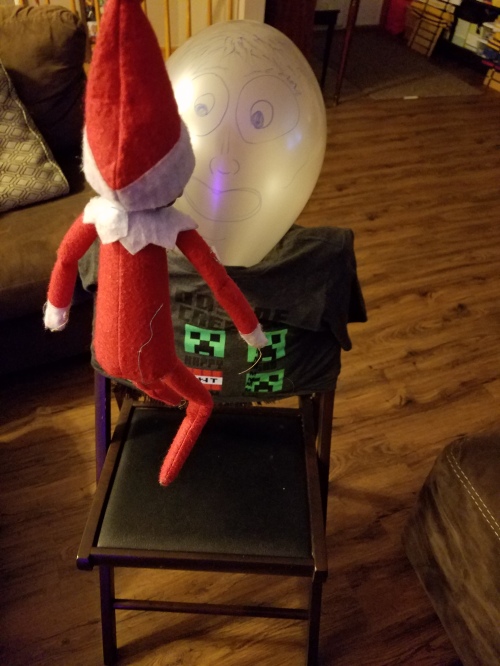 “Our mischief!” All eyes turned to Glitter, shocked she would promote mischief in any way.

“What?” she said defensively. “Just because I don’t like messes, doesn’t mean mischief is off the table.”

Lil cleared her throat. “Think about how much fun it would be to surprise Jake and your parents each morning.”

Joe looked down at the four hopeful faces. Pixie and Figgy seemed to hold their breath as he thought it over.

The corner of his mouth hitched up–the start of a smile. “Th-that would be a lot of fun.”

Twirling, swirling, bouncing and springing elves zipped and zoomed across the room.

“But,” asked Joe. “How are you going to convince Santa?”

The elves exchanged glances. How would they convince the big guy? What argument could they possibly make?

“I have an idea.” Glitter slowly approached, her heart sparkling brighter and brighter the closer she got. “And it’s foolproof.” 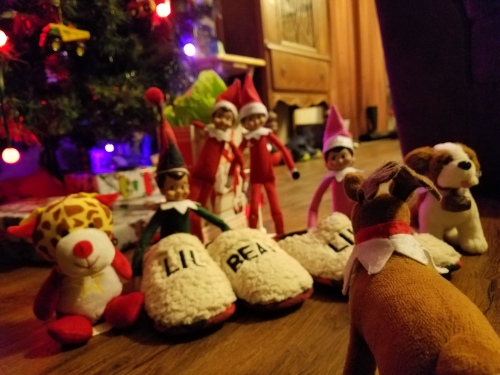