We started the day off with a dice counting game. Joe rolled the die, counted the dots and used a bingo dauber to fill in the corresponding number on the sheet.

I thought he would love this game and play it while I fixed breakfast. But not long after I’d put the sausage in the pan, he said he wanted to roll the die to the number and then use the dauber to fill it in.

“Don’t you want to count the dots too?”

I was a little disappointed, but he was having fun calling out the numbers he landed on.

After breakfast, I went downstairs to start a load of laundry. Our foam floor puzzle caught my eye. It has all of the letters of the alphabet and numbers 1-9 on interlocking squares.

Joe loves mazes so I decided to build a maze with the foam squares. I put the letters in alphabetical order and the numbers in numerical order.

Then, I went upstairs to get the smaller foam letters and numbers that I knew we had in a box, somewhere.

I called Joe and Jake downstairs to play game.

Joe immediately ran to the maze…but to him, it wasn’t a maze. It was a path.

So I went with it. I held up each of the small foam letters, asked Jake to identify the letter and Joe to tell me what sound the letter made. Then, I told them to navigate the path and find each letter.

They surprised me by searching for the letters together.

“Joe! S!” Jake would shout as he stood on the letter.

Jake started to get a little bored, but Joe stuck with it until he’d found all of the letters.

I moved on to numbers. For this game, I asked Jake to identify the numbers and Joe to use blocks to build towers on each square. 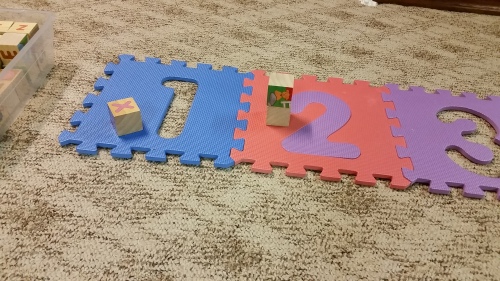 We had already been playing for about 30 minutes, so after two numbers, I’d lost them.